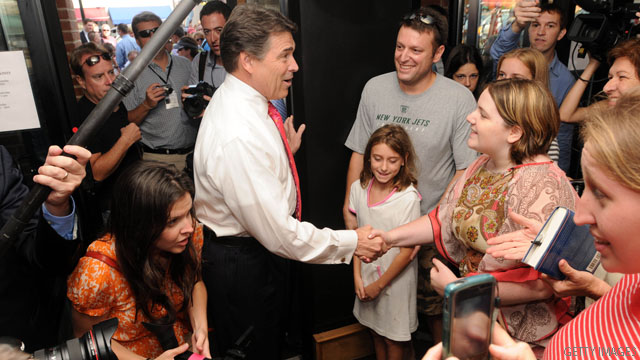 That amount will probably eclipse what the Perry campaign itself is able to spend in that period, the source said.

The SuperPAC, called "Make Us Great Again," is being run by one of Perry's former key aides.

Concerning the group's spending goal, a spokesman for "Make Us Great Again" told CNN that figure was in an "early planning document" that he said is now outdated.

"As the dynamics of this primary have changed, so have our targets and spending," Jason Miller said.

SuperPACs are able to raise unlimited amounts of money and are not bound by the Federal Election Commission restrictions regarding a $2,500 limit on donation per person to a campaign for the primary and separately for the general election.

One of the major trends of this campaign year has been the rise of these groups. Several of these committees have recently formed to support the Republican candidates, including Perry, former Massachusetts Gov. Mitt Romney and Rep. Michele Bachmann of Minnesota.

Democrats, who point to the Karl Rove-backed American Crossroads and other GOP organizations as major factors in the 2010 election, are also getting in the game forming committees to support President Obama as well as their congressional candidates. Under federal election rules these PACs cannot coordinate their activities with the campaigns.

These groups could also attack the other contenders and their records without the candidate himself or herself being accused of going negative.

In its pitch and coming ads, "Make Us Great Again" is expected to heavily tout Perry's record as governor and a leader. On its website, the PAC states "Texas has outpaced the nation in job creation, accounting for 45% of all newly created jobs in America. Today, Texas is one of the few states in the nation that is home to more jobs than before the recession." It also talks about how Texas has spurred growth by lowering taxes and reducing regulations – points Perry emphasizes on the campaign trail.

Those successes have drawn the ire of Perry's critics who point to some of the less favorable statistics for the state under Perry's tenure, including how Texas ranks vs. other states on providing health care and on poverty.