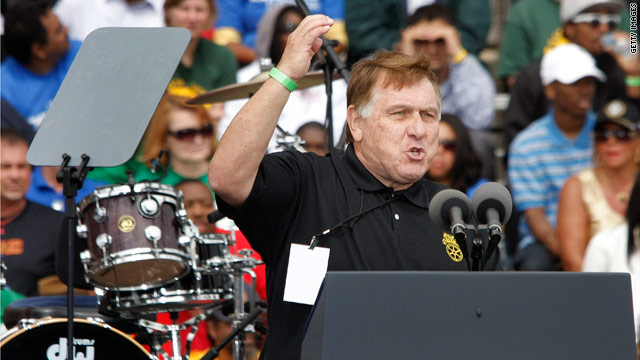 (CNN) - Teamsters President Jim Hoffa stood by comments he made at an event Monday, where he referred to Republicans as "sons of bitches," after receiving criticism from members of the tea party movement, including Sarah Palin.

In a statement Tuesday, Hoffa said his comments at the event echoed the sentiments of American workers who are "under attack by corporate-funded politicians who want to destroy the middle class."

"We're tired of seeing good-paying jobs shipped overseas. This fight is about the economy, it's about jobs and it's about rebuilding America," Hoffa said. "As I said yesterday in Detroit, we all have to vote in order to take these anti-worker politicians out of office."

Hoffa said his entire speech shows he was "referring to voting out the Tea Party politicians in 2012, not inciting violence against members of Tea Party organizations."

Speaking onstage before the president arrived at a Labor Day rally Monday, he stressed the importance of creating American jobs and in part blamed members of the tea party movement for stalling action in Washington.

The Tea Party Express quickly responded to the comments in an email to supporters and Chairwoman Amy Kremer told CNN Tuesday the comments were "disgraceful."

"This is essentially calling for violence," Kremer said on CNN "Newsroom." "Anybody that says let's 'take out these SOBs,' that is absurd and not the language we should be using when we're having these conversations."