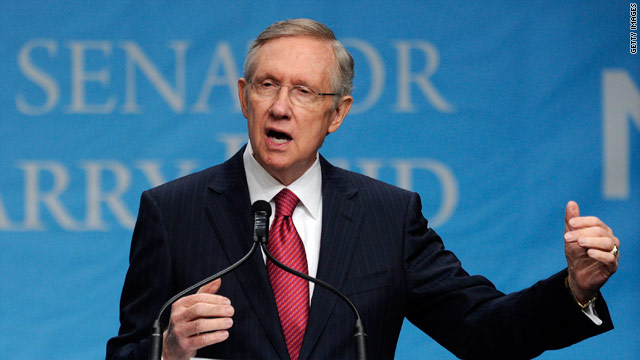 The measure would then have to be voted on in the House- where Majority Leader Eric Cantor, R-Virginia, has insisted any federal funding to deal with the recent spate of natural disasters be offset with cuts elsewhere in the federal budget.

Democrats, worried a budget fight could delay aid getting to disaster victims, believe an emergency supplemental spending bill will be harder for budget minded Republicans like Cantor to oppose.

“Some of my Republican colleagues are trying to – I was going to say something vulgar and I’m not going to do that – are trying to cater to the Tea Party by holding up relief efforts,” Reid told reporters. “For example, Rep. Cantor has suggested that we should hold up disaster relief to meet the Tea Party’s demands.”

“I hope my Republican colleagues will put politics aside and work with us to get the American people the relief they need now,” Reid said.

For his part, Cantor, while not responding directly to Reid, pushed back at the notion that he was planning to hold up relief money for areas hit by Hurricane Irene and other disasters.

“I am not for taking hostages here. I just think we can act responsibly,” he said.

“Unequivocally, I am for making sure people get their money,” Cantor told reporters. “I have never, never said that I’m holding anything hostage or would be playing politics with this.”

Cantor noted that his Virginia district was hit hard by the two back-to-back natural disasters last month – first the earthquake and then the major flooding caused by Hurricane Irene.

“Don’t tell me that we don’t know from disaster,” Cantor said firmly.

While Cantor insisted no emergency aid would be held up he didn’t specifically address how the House would handle approval of additional FEMA funding.