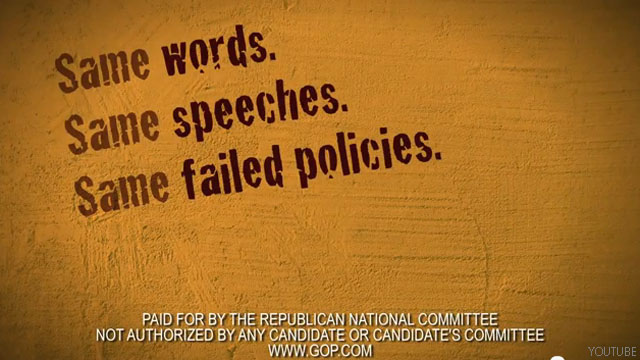 The minute-long spot plays back-to-back clips from the president over the past two years saying he is focused on job creation and tracks the unemployment rate during the same time. It ends with "SAME WORDS. SAME SPEECHES. SAME FAILED POLICIES" written across the screen.

"For the past two and a half years, President Obama has repeatedly promised to focus on jobs, but, instead, he has prioritized taxing, spending and regulating," RNC Chairman Reince Priebus said in a statement. "With ZERO jobs created in the month of August, it's time to change direction."

When Obama came into office, in January 2009, the national unemployment rate was at 7.8 percent. It peaked in October of 2009 at 10.1 percent and is currently at 9.1 percent.

Republican radio ads, launched Tuesday, will also air in battleground states across the country, voicing similar criticism of the president.

"After a 10-day luxury vacation on Martha's Vineyard, the president says he'll finally get serious about jobs," the ad says. "But we've heard this before."

The ramped up campaign comes as Obama is scheduled to unveil his jobs plan to a joint session of Congress Thursday.

The Democratic National Committee responded to the RNC with a "fact check" explaining how Republican policies have hurt job creation in the U.S. and taking aim at current presidential contenders.

"The Tea Party platform that Mitt Romney, Rick Perry and the rest have signed on to, including the Tea Party economic plan passed by the House over the summer, would cost the U.S. millions of jobs and grind our economy to a halt – all in the name of a far right wing ideology that places a higher priority on shielding the wealthy from paying their fair share over helping the middle class get ahead and creating jobs," DNC Press Secretary Melanie Roussell said in a statement.