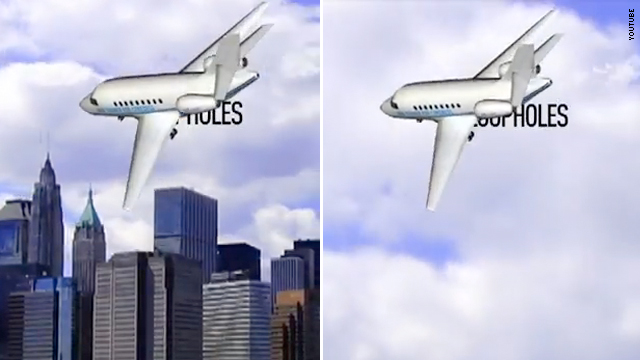 (CNN) – Hours after it released a TV ad Thursday, the Democratic Congressional Campaign Committee changed the campaign spot when concerns were raised over sensitivity toward the Sept. 11 attacks.

Bannered along the side of the plane in big letters was the name of the Republican candidate in the race, Bob Turner, a former cable TV executive.

"The independent expenditure made a small tweak to remove the brief image of the skyline,” said Jennifer Crider, spokesperson for the DCCC, in a statement late Thursday night. She added that the DCCC didn't want to distract from its main message against Turner.

The move comes just days before Election Day in a race that was once presumed safe for Democrats–but now puts the two candidates in a head-to-head sprint toward the finish line.

The ad began airing in the New York media market Thursday and will run through Tuesday, said Crider. It will not air on Sunday, the 10th anniversary of 9/11.

While it was published on YouTube earlier Thursday, an error message said the video had been removed by its user later in the day.

The 30-second spot hit Turner for living the “high life,” citing a statement he made at a recent debate where he said he’s “never met a corporate tax loophole [he] didn’t like.”

“While you struggle to pay the bills, Turner supports tax loopholes for corporations, but would cut benefits for Medicare and Social Security-even raise the retirement age,” the ad’s narrator said.

Democrat David Weprin’s campaign made Turner’s “loophole” comment a strong piece of ammunition this week, painting the Republican as self-interested and greedy.

But Turner’s team fired back-before the ad aired-saying “career politicians” like Weprin “have made a mess of our tax code” to favor special interests.

The ad ends by touting a New York Times endorsement for Weprin, arguing that the Democrat will protect entitlement programs and the middle class.

Pouring in nearly $500,000 for the ad buy, the DCCC contribution fueled further speculation that Democrats are worried about losing the race.

While Democrats outnumber Republicans in the ninth congressional district, which covers parts of Queens and Brooklyn, by three to one, the race has become closer than expected this summer.

The next poll is set to release Friday.