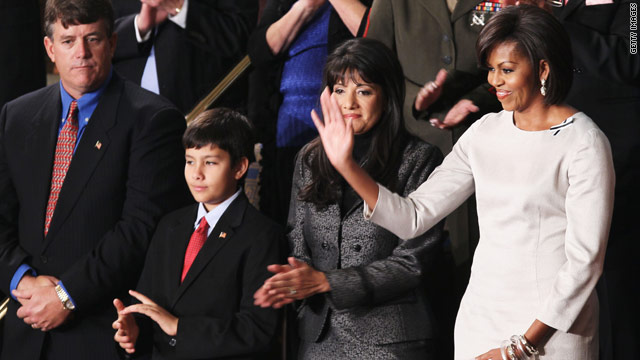 Washington (CNN) – First lady Michelle Obama has invited a diverse array of business executives, military personnel and workers – both well known and unknown – to sit in her box at President Barack Obama's speech to a joint session of Congress on Thursday.

The selection of 24 guests and what each guest is noted for in the White House release of guests are considered indicators as to what the president's speech may address.

Among those attending the speech will be Jeffery Immelt, CEO of General Electric and the chairman of the President's Council on Jobs and Competitiveness and Steve Case, co-chair of the National Advisory Council on Innovation and Entrepreneurship. Richard Trumka, president of the large labor union.
A number of prominent politicians will also sit with the first lady.

Maryland Governor and former Mayor of Baltimore Martin O'Malley, noted in the White House release for "spurring innovation in all sectors of business, academia, and government," has been invited, along with Cincinnati Mayor Mark Mallory and Los Angeles Mayor Antonio Villaraigosa.

Dannie and Sabrina Mangrum will also sit with the fist lady and the White House notes a "tax cut would benefit their family as they are looking for ways to provide for their children and their education." According to White House sources, the president's job plan could include a $120 billion to extension of the current payroll tax cut.

Hector R. Sealey, another guest of the first ladies for tonight's speech, has been working for 30 years in the construction industry, states the White House release. "Hector, along with almost a million workers, is at risk of losing his job if Congress does not act and the transportation bill expires," states the guest list.

President Obama has said that his plan for Congress will look to help the struggling construction industry. White House sources have indicated that the plan could devote up to $100 billion to fixing roads and bridges.

The military will be represented in the first ladies box.

Joseph Kidd, a Navy hospital corpsman that has been deployed twice to Iraq, had lunch with the President on his August bus tour through the Midwest. A release by the White House stated Kidd asked "the President to help with credentialing programs that would allow a service member to take his or her skills from the military directly into the private sector."

Other guests are as follows: