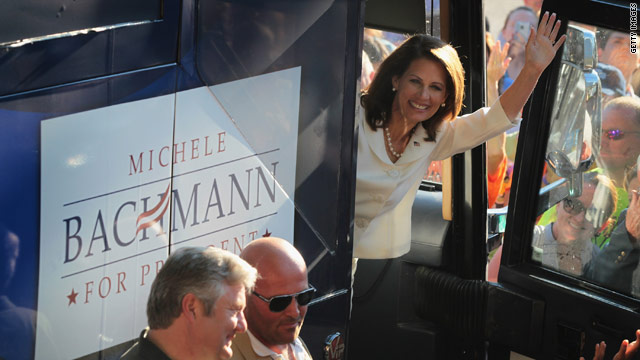 Bachmann to take in Iowa gridiron

Washington (CNN) – The change from summer to fall this year means two things for the state of Iowa – politics and football. And this weekend, those two passions will meet.

Republican presidential hopeful and Minnesota Rep. Michele Bachmann will be in the stands on Saturday when the Iowa Hawkeyes face off with the Iowa State Cyclones. The two teams will be competing for the Cy-Hawk Trophy.

Bachmann is no stranger to Ames, Iowa, the location of Saturday’s game. She edged out Rep. Ron Paul, R-Tex.as to win the Ames Straw poll in August; a win that she had hoped would propel her to the front of the Republican field.

The first game of the Iowa State-Iowa rivalry was played in 1894. Iowa State won the first three games, but since that time University of Iowa won 39 out of the 55 meetings.

A release from the Bachmann campaign stated, “Bachmann will mix-and-mingle with voters, and participate in tailgate activities at the East Stadium Gate.” She will be joined by Iowa state Senator Jack Whitver.

The campaign release did not state whether she would be supporting Iowa or Iowa State but Whitver in an alumnus of Iowa State.

Bachmann announced her bid for the GOP nomination in Waterloo, Iowa and has made the state a focal point of her campaign. The first-in-the-nation caucus will be held on February 6, 2012.