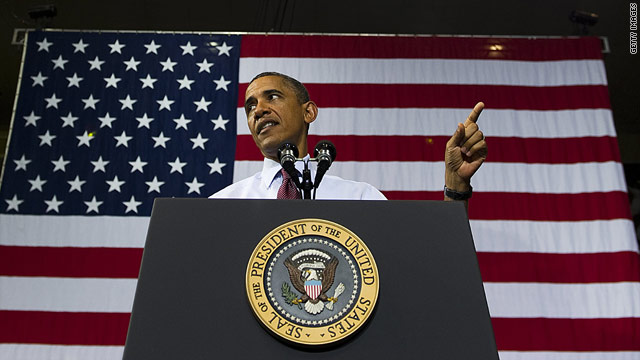 The president traveled to House Majority Leader Eric Cantor's district in Richmond to talk up his jobs recovery proposal, which is expected to be put before Congress next week.

Political Notebook: Listen as CNN Contributor John Avlon and CNN’s Bob Costantini look at the political ups and down of the president’s address to Congress. And the White House Communications Director talks sales.

But the state broke narrowly for Obama in 2008 and may factor heavily in whether he'll be able to get re-elected.

He carried Ohio by five percentage points over McCain in 2008, and will likely attempt to recapture state again in 2012.

Like Virginia, Ohio elected a Republican following four years of Democratic gubernatorial leadership, but Gov. John Kasich recently stirred up controversy by spearheading a move to limit collective bargaining rights for workers in an effort to battle the state's budget deficits. Kasich saw his approval ratings fall as a result, and the state is expected to be competitive in electing the next president.

And though the White House spokesman Jay Carney said Friday that Obama's agenda in both battleground states is focused on drumming up support for his "American Jobs Act," by going “all over the country urging Americans to urge their representatives to take action on this essential package of proposals to help grow the economy, Ohio and Virginia are also states he'll need to make a play for in 2012.