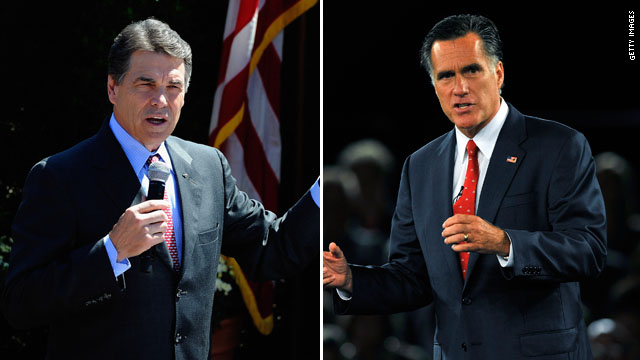 It all started Wednesday night, at the debate at the Reagan Presidential Library in Simi Valley, California, when Texas Gov. Rick Perry, the new guy in the race and the current frontrunner in the national polls, and former Massachusetts Gov. Mitt Romney, the previous frontrunner in the GOP battle, sparred over jobs and social security.

At the debate, Perry stood by earlier comments that Social Security is a "Ponzi scheme" and that it was a "monstrous lie" to tell young workers that the 74-year-old pension system would be there when they retire. Romney responded at the debate, and since then both candidates have swung at each other through email releases and on social media.

On Sean Hannity's national radio program, Romney went a step further than he did on stage Wednesday night, saying that "if we nominate someone who the Democrats can correctly characterize as being opposed to Social Security, we would be obliterated as a party."

Perry's team fired back, noting that in Romney's policy book "No Apology," the former Massachusetts governor compared the management of Social Security to a felony.

And the Perry campaign started highlighting comments Romney made August 24 in Lebanon, New Hampshire, 11 days after Perry jumped into the race. At a campaign stop, Romney said "Republicans, like myself, are not gonna cut Social Security or Medicare for people who are retired or near retirement. And for the people who say we are, they are demagoguing an issue very much that harms America."

As for Romney's charge that Perry would possibly abolish the popular government program, Perry's team says that the Texas governor believes that Social Security must be protected for current beneficiaries and those nearing retirement age.

The two candidates will once again be standing side by side Monday night, at a CNN Tea Party Republican Debate. CNN and the Tea Party Express, a leading national tea party organization, are teaming up to put on the debate at the Florida State Fairgrounds just outside of Tampa, Florida.

While the debate is a GOP affair, Democrats are jumping on the disagreement between Romney and Perry over Social Security. Previewing her trip to Tampa to respond to the debate on Monday, Rep. Debbie Wasserman Schultz of Florida, the chair of the Democratic National Committee, made clear that the back drop for the debate, a state with a heavy senior population reliant on Social Security and Medicare, would figure prominently into the Democrat prebuttal plans and to their response to the debate itself.

"Now these candidates are coming to Florida – a state with a heavy senior and retiree population. Seniors don't want either Rick Perry or Mitt Romney's approach to dismantling Social Security," said Wasserman Schultz. "Ending Medicare and dismantling Social Security are curious positions for candidates campaigning in Florida – but that's exactly what these Republicans support and believe. At this debate and for the entirety of this campaign we'll make sure voters know it."