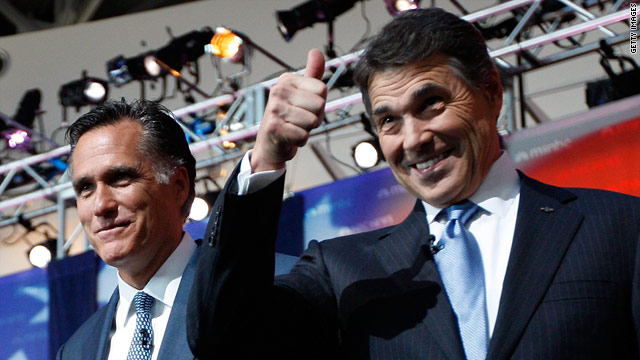 Tampa, Florida (CNN) - Rick Perry is going to take part in a straw poll later this month in Florida, but Mitt Romney's not changing his mind about skipping the event.

The Texas governor's campaign confirmed to CNN that Perry will personally take part in the Florida GOP's "Presidency 5" straw poll on September 24 in Orlando.

"Gov. Perry is fully committed to participating in P5," Perry campaign spokesman Ray Sullivan told the St. Petersburg Times on Friday. "The governor is committed to working hard for the vote in Florida. We have the beginnings of a very good organization in Florida and believe the governor's message will win support in Florida."

But a spokesperson for Romney, the former Massachusetts governor who's making his second bid for the White House, told CNN Friday that they have no plans to change their strategy. Romney also skipped last month's GOP presidential straw poll in Ames, Iowa. In June the Romney campaign said that while they respect the straw poll process, they would not take part in straw polls this cycle and instead "focus our energies and resources on winning primaries and caucuses."

The Saturday straw poll follows a GOP presidential debate, which is part of the "Presidency 5" events, on Thursday, and a CPAC Florida gathering on Friday. All three events are being held in Orlando. Romney will be on the stage at the debate and will speak at the Conservative Political Action Conference gathering on Friday.

Rep. Michele Bachmann of Minnesota and former Utah Gov. and former U.S. Ambassador to China Jon Huntsman will also be on stage at the debate and speak at the CPAC event but will not take part in the straw poll.

Rep. Ron Paul of Texas, who's making his third run for the presidency, former House Speaker Newt Gingrich, and former Sen. Rick Santorum of Pennsylvania have also committed to the straw poll, which should draw around 3,500 Republican activists from across the Sunshine state. Florida is expected to play a crucial role in picking the next GOP presidential nominee. If the current primary and caucus calendar holds up, Florida may vote right after Iowa, New Hampshire, Nevada and South Carolina.