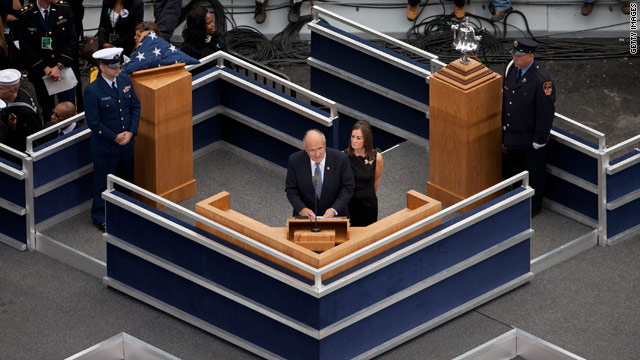 Giuliani reflects on impact of 9/11

(CNN) – Former New York Mayor Rudy Giuliani recalled having breakfast at the Peninsula Hotel in Midtown Manhattan on the morning of September 11, 2001, when he learned an airplane had struck the World Trade Center.

Giuliani described seeing the second plane hit and an “explosion” while he was en route to ground zero, when he “knew it was a terrorist attack,” he said in an interview on CBS’ “Face the Nation” Sunday.

“But it wasn't... until I actually got here and I saw the planes and I saw people throwing themselves out of the window that…my goodness, this is the worst that we've ever faced,” he continued.

The then-mayor said he thought to himself, “We just better pray to God that we can do the right job."

But for Giuliani, the nation has changed for the better in the ten years since.

“Sure, it changed the country,” he said. “Mostly in good ways, I think. It made us more realistic about the threat that we faced.”

And he listed ways the nation has rebounded.

“I think we have much better intelligence today,” Giuliani observed. “I think spiritually we're stronger. We have to remind ourselves…we were attacked with the worst attack in the history of this country and we survived it. And the city is bigger, stronger - you know, twice as many people live down here now as before September 11th.”

“The terrorists thought they were going to destroy this place - this place is twice as big as it was before,” he stated.

“So we showed a lot of resiliency that we need to remind ourselves of. And we had a tremendous unity."

Though Giuliani sought the Republican nomination for president in 2008, after Michael Bloomberg was elected to succeed him, he revealed that he’s reserving thoughts of a repeat run in 2012 for another time.

“Around 9/11 I don't like to think about politics as much,” Giuliani said.