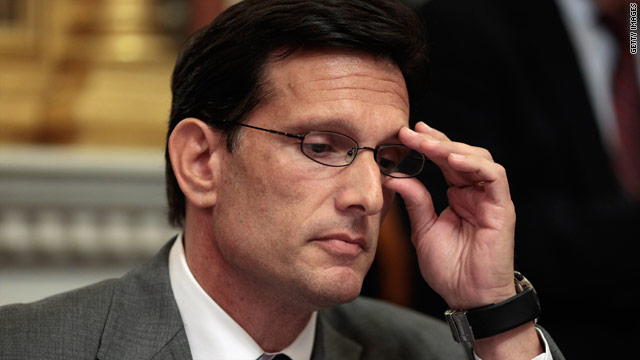 Washington (CNN) - House Majority Leader Eric Cantor continued to reach out to work with President Obama on his jobs bill Monday, but emphasized that Republicans are focused on items they support in the plan like the tax breaks and will oppose the administration's request for new federal spending for infrastructure projects.

"Anything that is akin to the stimulus bill is not going to be acceptable to the American people," House Majority Leader Eric Cantor said.

The number-two House Republican argued that the 2009 stimulus that aimed money at boosting public sector jobs didn't work and instead the GOP wants to target aid to small businesses.

"The fact is we don't have the money and we've got to prioritize and right now it's about getting people back to work," Cantor said.

In addition to throwing cold water on more federal spending to rebuild schools and roads, Republicans pushed back at the president's proposal to limit tax deductions on high end wage earners and close several tax loopholes as the way to pay for his $447 billion jobs package.

"I sure hope that the president is not suggesting that we pay for his proposals with a massive tax increase at the end of 2012 on the job creators that we're actually counting on to reduce unemployment," Cantor said at his weekly session with reporters on Capitol Hill Monday.

"It would be fair to say this tax increase on job creators is the kind of proposal both parties have opposed in the past," Michael Steel said in a written statement.

But Steel added Republicans want to find another way to pay for it, "We remain eager to work together on ways to support job growth, but this proposal doesn't appear to have been offered in that bipartisan spirit."

Cantor cited tax credits for employers, reforming aid for the jobless, and passage of the three pending trade deals as areas he sees as ripe for bipartisanship. While he agreed that infrastructure projects were worthy of focus, he said Congress should not be adding new money, but instead streamlining the process for getting current resources to state and local governments.

He repeated his criticism that the president's repeated "pass my bill" message was not sitting well with Republicans.

"I do not think the president's all or nothing approach is something that is constructive," Cantor told reporters, adding, "let's not allow the things his bill that we disagree with to get in the way of producing some results."