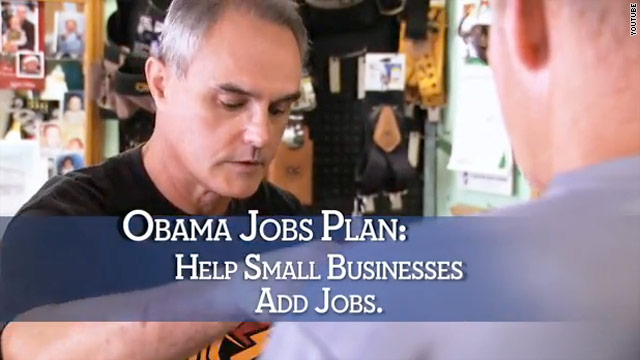 Washington (CNN) - As President Barack Obama hits the road to sell his jobs plan Monday, the Democratic National Committee is hitting the airwaves in support of the bill.

The DNC took out a series of ads on television and online this week, boosting the $447 billion American Jobs Act that Obama addressed Congress about last week and sends to the Hill Monday.

The television ad, "14 Months," begins airing Tuesday as part of an initial round of ads that will last several weeks. Among the states where the ad will broadcast include early battleground states for the 2012 presidential election, such as Iowa, New Hampshire, Nevada and South Carolina.

While the DNC did not give a specific figure for the cost of the ad buys, Melanie Roussell, national press secretary, said the amount was "substantial."

Other versions of the ad showed bulleted items from the plan: "Tax cuts for workers. Tax credits for small businesses that add jobs. Fully paid for."

The commercial ends with a URL address to a website the DNC created to educate the public on the plan.

Web versions of the ad also promoted details on how the plan will be funded.

"It's paid for by cutting wasteful spending, corporate loopholes and tax cuts for the wealthy," said the narrator.

As the ad ends, it asked viewers to read the plan and call members of Congress to support it.