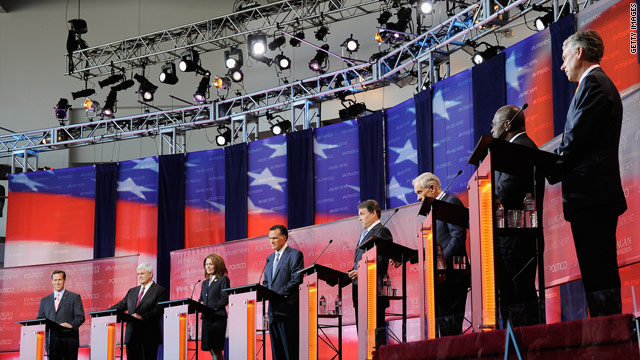 Tampa, Florida (CNN) - Florida will definitely be center stage in the Republican presidential sweepstakes for the next two weeks. The state is hosting two debates among the contenders, a major conference where they will all speak and a straw poll.

Some analysts say these activities just point to how crucial the state will be both in the Republican primary and also in the general election.

One major reason for the importance in the state is that it includes three major groups of voters who have played a major role in past contests: the elderly, Hispanics and independents.

The Republican who does well in the Sunshine State in the primary will get a boost come the general election.

"If you lose Florida, you will lose the general," said GOP consultant Ford O'Connell, who worked in the McCain-Palin 2008 campaign.

The GOP candidates have already worked hard to build a campaign in the state. Mitt Romney has lined up some major fundraisers and has paid several visits. Rick Perry already has received key endorsements. Jon Huntsman based his campaign in the state but just moved some of his staff to New Hampshire to bolster his efforts there.

Now dominating a lot of the discussion in the state is the criticism by Perry of Social Security as a "Ponzi scheme" because it is a question of how much younger workers will actually get back in benefits vs. what they put in. He initially made those comments in a book but did not back away from them last week saying he was just being frank.

"It will be very interesting to see how he interacts" with voters after those remarks, O'Connell said.

It is expected Perry will get pressed on his views on Social Security Monday night in the CNN Tea Party Express debate.

The Romney campaign has been circulating a handout contrasting his and Perry's views on Social Security to voters in Florida in areas where the Texas governor is expected to campaign. It says: "Rick Perry. How can we trust anyone who wants to kill Social Security?'

O'Connell said the issue and how he explains his views is "a make or break moment" for the Perry campaign.

Perry is expected to strongly engage in the state.

While Romney and Bachmann have decided not to participate in the Presidency 5 straw poll next weekend because of the commitment of resources it will take, Perry announced last week he will.

"Florida is very important to me, and I am looking forward to bringing my pro-jobs conservative message to Florida and the Presidency 5 straw poll events," he said in a statement last week.

Florida has not decided exactly when to hold its primary next year although it is expected to be early in the process and therefore play a large role in helping to choose the nominee. Florida Republicans are expected to choose the date by the end of this month.