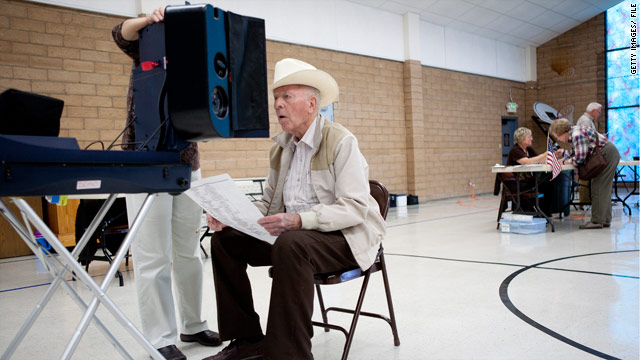 Washington (CNN) – Nevada's 2nd Congressional District may likely stay in Republican hands – the district has never elected a Democrat – but the race for the seat has also become a barometer for how voters north of Las Vegas feel about Washington.

Republican Mark Amodei is leading Democrat Kate Marshall on many fronts, including voter turnout. Ahead of the Tuesday's special election, the Cook Political Report says the race is "likely Republican."

Both campaigns centered on tying the opposing candidate to Washington. By doing that, this election has become a referendum, if just applicable to northern Nevada, on whom in Washington is more tainted in the eyes of voters.

Throughout the campaign, Marshall tried to link Amodei with Republican Rep. Paul Ryan of Wisconsin and his plan to privatize Medicare for anyone younger than 55. In an ad that ran in August, Marshall charged that Amodei had called Ryan's plan "excellent."

"Amodei thinks it's excellent to give seniors a voucher, double their out of pocket costs and give tax breaks to millionaires," says the ad narrator.

During their debates, Marshall tried the same attack, saying that Amodei would reduce Social Security and Medicare benefits if sent to Washington.

"I stand firm to keep Social Security and Medicare," Marshall said during a debate. "Mr. Amodei doesn't agree with me."
Amodei, on the other hand, has regularly tied Marshall with Democrats in Washington, particularly President Barack Obama, Vice President Joe Biden and Senate Majority Leader Harry Reid of Nevada.

In an ad titled "Echo," clips from the three men are played, followed my Marshall repeating the phrase word-for-word. When Obama says, "Yes we can," Marshall then comes up on screen saying the same thing. The ad finishes by calling Marshall a "rubber stamp."

Another ad tries a similar tact. With pictures of Obama, Biden and Reid on screen, Amodei says, "We were promised recovery. We've been given misery. Let's get Washington's attention."