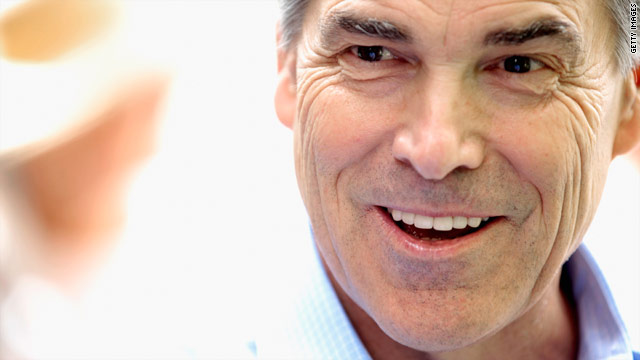 New CNN Poll: Perry on top when it comes to electability

Tampa, Florida (CNN) - Hours before the start of the first-ever CNN/Tea Party Republican debate, a new national survey indicates that Texas Gov. Rick Perry is maintaining his lead in the race for the GOP presidential nomination.

And according to a CNN/ORC International Poll, what appears to be Perry's greatest strength - the perception among Republicans that he is the candidate with the best chance to beat President Barack Obama in 2012 - seems to be exactly what the GOP rank and file are looking for.

The survey, released Monday morning, indicates that 30 percent of Republicans and independents who lean toward the GOP support Perry for their party's nomination, with former Massachusetts Gov. Mitt Romney at 18 percent. Romney, who's making his second bid for the White House, had been leading the list of Republican candidates in the national polls, but since Perry launched his campaign a month ago he's jumped ahead of Romney to capture the top spot.

The poll's Monday morning release comes a few hours before CNN teams up with the Tea Party Express and tea party groups from all 50 states to put on a presidential debate that will be held at the Florida State Fairgrounds just outside Tampa.

According to the survey, former Alaska Gov. Sarah Palin is at 15 percent. The 2008 GOP vice presidential nominee has flirted with a presidential bid, but hasn't taken any concrete steps to launch a campaign.

Rep. Ron Paul of Texas, who's making his third run for the White House, is at 12 percent. Every other candidate is in single digits.

Rep. Michele Bachmann, who was at 10 percent in the last CNN poll, now stands at four percent.

With Palin out of the running, the headline stays the same: Perry 32 percent, Romney 21 percent, Paul 13 percent and all other candidates, including Bachmann, in single digits.

"Perry doesn't simply have the most support in a hypothetical ballot - he also tops the list of GOP candidates on every personal quality tested," adds Holland.

Thirty-six percent, for example, see him as the strongest leader in the field, with Romney second at 21 percent. According to the poll, 35 percent say Perry is the Republican candidate most likely to get the economy moving again, with Romney in second at 26 percent.

Nearly three in ten say that Perry is the candidate who is most likely to fight for his beliefs, with Palin in second place at 23 percent and, significantly, Romney in a distant tie for fourth at just 11 percent.

"That may go a very long way toward explaining his rise in the polls, since three-quarters of all Republicans say they would prefer a candidate who can beat President Obama over one who agrees with them on major issues," says Holland.

The poll indicates that Perry doesn't fare quite as well on issues. Only 26 percent say he is the Republican hopeful who is most likely to agree with them on the issues. That's good enough for the top spot on that measure, too, but it's a far cry from the low 30s and high 40s Perry pulls on electability and leadership.

Perry's biggest Achilles heel may be the likeability factor. Only one in four say he is the most likable GOP candidate out there, his lowest mark on the six items tested.

The poll was conducted for CNN by ORC International September 9-11, with 446 Republicans and independents who lean Republican questioned by telephone. The survey's overall sampling error is plus or minus 4.5 percentage points.