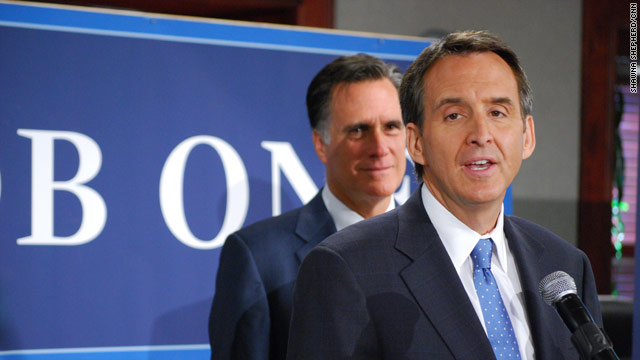 Pawlenty's new role was apparent at a press availability with the two men in North Charleston. Romney was able to step back, at least for one question, and let his new national co-chair speak for his record.

An NBC reporter asked, didn't the former governor of Minnesota once refer to Romney as a "co-conspirator" of President Barack Obama's health care plan? As Pawlenty took the microphone, Romney's grin got bigger. Pawlenty dutifully fell in lockstep:

"Governor Romney, I think correctly, took the approach that states should try different things, innovate, be the laboratories of Democracy as it was envisioned by the founders," said Pawlenty, referring to the comprehensive health care law implemented in Massachusetts during Romney's tenure. "He's committed to repealing Obamacare at the national level and I think that's the correct position and one that I'm completely comfortable with."

Romney didn't let Pawlenty take all the hits – after all he'll be busy spinning on Romney's behalf after the "Tea Party Republican Debate" broadcast on CNN from Tampa Monday evening – he reminded everyone that so-called Romneycare and Obamacare are not one in the same.

Romney brought up less controversial state mandates like auto insurance and education as he defended the Massachusetts health care mandate. "What we did was right for our state but simply wrong for the nation," he said.

Although he didn't mention his strongest competitor in the race to the White House by name, Romney didn't hesitate to bring up a controversial decision by Texas Gov. Rick Perry to issue an executive order mandating sixth-grade girls to be vaccinated against human papillomavirus, known to cause cervical cancer.

"Some states, in Texas for instance, mandates that young girls, or did mandate, that young girls had to get inoculations for sexually transmitted diseases," said Romney. The executive order was overturned by the Texas legislature and Perry has since acknowledged it was a mistake.

Romney's trip with Pawlenty to the pivotal first-in-the-South primary state was relatively brief, leaving for Tampa after getting a private tour of the Boeing plant, delivering a speech on labor policy and talking to reporters at North Charleston City Hall.

He was last in South Carolina a week ago, appearing at a Labor Day presidential forum in Columbia organized by Sen. Jim DeMint.

Romney has spent little time so far in South Carolina compared to his first bid for the White House in 2008, spending millions of dollars here only to finish fourth in the primary.

David Raad, the candidate's senior adviser in the state said, "This is one of many trips the governor is going to make to the state of South Carolina."

"As the campaign progresses you'll see the operation unfold, the engagement continue to unfold and you'll see the governor here substantially," said Raad.

South Carolina State Treasurer, Curtis Loftis, who is considered a tea party favorite and is serving as Romney's state chairman, also appeared with Romney and Pawlenty at the Monday event.