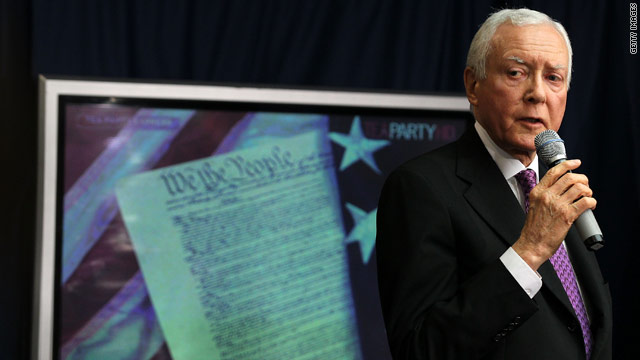 Romney endorses Hatch as both are pushed from right

FreedomWorks PAC, a leading grassroots conservative organization, announced in June that it would launch a "Retire Orrin Hatch" campaign because the group believes the 34-year Senator has to often moved to the left on issues.

That same organization has also been very outspoken about Romney's bid for president. At another tea party group's event in August, FreedomWorks organized a protest outside the event because they said Romney was now "pandering" to the tea party, a group that he had never been affiliated with before.

Though FreedomWorks is hoping to remove Hatch from office, other conservative leaders, including Steve Forbes, vice chairman of the FreedomWorks Foundation board, have expressed support for him.

"I feel it a privilege to endorse your reelection effort next year," stated a letter from Forbes that the Hatch campaign released. "I have known you since the late 1970's when you first came to the Senate and courageously battled anti-growth, anti-business legislation being vigorously pushed by Big Labor."

Sarah Palin, the former governor of Alaska and 2008 vice presidential candidate, has also supported Hatch. "He is doing good in terms of trying to get a balanced budget and he has been for the last couple of decades," Palin said on Fox News. "He has pushed hard for some fiscal reforms that we have got to see implemented."

FreedomWorks has a history in Utah, as well. In the few months leading to the 2010 midterm election, the organization was one of a few groups that went after three-term Republican Sen. Bob Bennett. At Utah's GOP nomination convention, Bennett was defeated in favor of the more conservative Mike Lee.

With FreedomWorks attacking both Romney and Hatch from the right, the two offered a great deal of support to one another.

"Orrin is a committed public servant who always puts the people of Utah first," said Romney. "I couldn't be prouder to endorse him in his reelection bid."

Romney highlighted Hatch's work as the ranking member of the Senate Finance Committee as a reason for his support. Romney said Hatch would continue to build on "strong pro-growth policies" and bring jobs to Utah.

Though the Hatch has not officially supported Romney race for president, he came very close in a joint release with the former Massachusetts governor.

"I'm deeply humbled by Mitt's support," stated a release from Hatch. "He is a man I deeply admire and whom I know would lead our nation out of the economic mess we are in today."

Hatch, who was reelected in 2006 with 62 percent of the vote, has no formal challengers, yet.

- CNN's Paul Steinhauser and Shannon Travis contributed to this article.