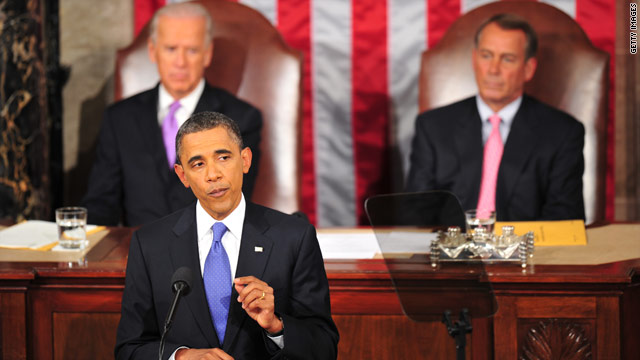 CNN Poll: President gets no bounce from speech, but disapproval rating peaks

Washington (CNN) – President Barack Obama didn't score any political points with his speech on jobs to a joint session of Congress last Thursday. According to a new CNN/ORC International poll released Tuesday, the president's approval rating stands at 43 percent, virtually unchanged from the 45 percent approval rating in the previous CNN poll.

Although this is not the lowest number of those who say they approve of how Obama is handling his job-he reached 42 percent one year ago-the number who disapprove of the president reached its highest during his presidency in the poll.

The survey reveals that 55 percent say they do not approve of how Obama is handling his duties in the White House and the number of Americans who think he is a strong leader has dropped to a new low.

"A familiar pattern in public opinion on Obama again asserts itself," says CNN Polling Director Keating Holland. "Americans don't like Obama's track record on major issues while they continue to like him personally."

Less than one in ten think Obama's policies have made the economy better, although another four in ten credit them with preventing the economy from being even worse than it is today. Thirty-seven percent say that Obama has made economic conditions worse and 15 percent think his policies have had no effect.

The president is on the road this week touting a new policy–his $447 billion jobs proposal-that he's encouraged Congress to take up and pass. With stops in Richmond, Virginia last week, Columbus, Ohio Tuesday, and North Carolina on Wednesday, the road trip appears to be doubling as a swing through battleground states.

But with more than half the nation saying Obama cannot manage the government effectively in the poll and no bounce in public opinion following his speech, the president may have his work cut out for him selling his plan to the public.

There is some good news for Obama in the poll. Among Democrats, his standing has improved. Opinions among the Democratic base have turned the corner after a drop in the wake of the debt ceiling agreement. The number of Democrats who wanted the party to renominate Obama dropped to an all-time low of 70 percent in early August, but it's on the rise now-72 percent in our last poll and 76 percent in the current survey.

The poll was conducted for CNN by ORC International from September 9-11 among 1,038 adults by telephone. It has an overall sampling error of plus or minus three percentage points.