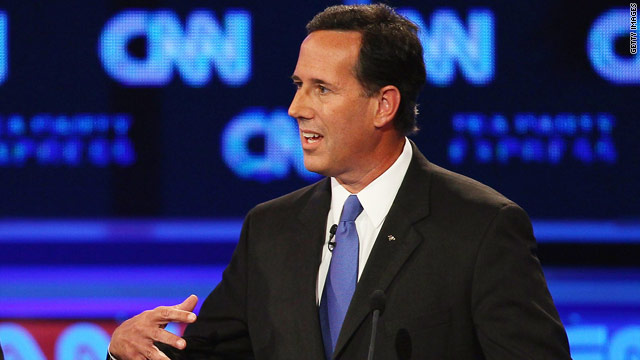 Can he outwit, outplay, and outlast his political opponents?

After previously setting a make-or-break benchmark for staying in the race, Santorum now says he will not count himself out.

In August, just before Iowa's critical Ames Straw Poll, Santorum said his presidential campaign could end if he didn't place "in the top five" during an interview with CNN Chief Political Correspondent Candy Crowley.

After Monday's debate he was asked if he's currently drawing up benchmarks that might cause him to exit the race.

"I mean right now, I feel like I'm on an episode of 'Survivor,'" Santorum said. "And it's just a matter of surviving, raising enough money to keep the campaign organization going. And we're focused on - I would say - three-and-a-half states. Iowa, New Hampshire, South Carolina and a little bit here in Florida."

Santorum continued, "The next benchmark is Iowa. And I feel very, very good that we got a bump... from the Ames Straw Poll."

"Hopefully tonight will be another example of another debate where I was out there providing substantive answers and drawing appropriate contrasts on public policy that will give people the choice to choose a truly conservative public official who has done it when it wasn't popular and won in a state that ... is critical to win if we're going to win the presidency."