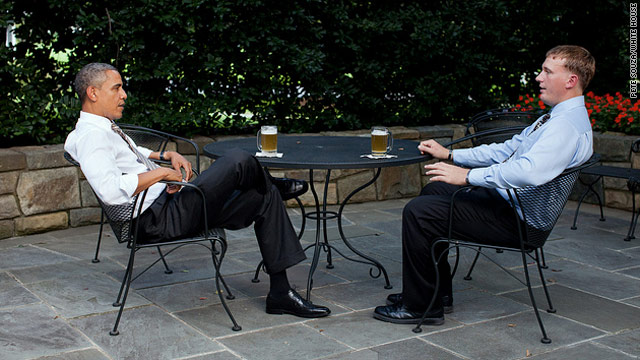 President pauses for beer with future Medal of Honor recipient

Washington (CNN) - President Barack Obama enjoyed a beer with Dakota Meyer on the patio outside the Oval Office Wednesday. The president will present Meyer with the Medal of Honor Thursday during a ceremony at the White House.

According to a series of tweets by White House spokesman Jay Carney, when a member of the president's staff called Meyer over the weekend to prepare, Meyer made a special request.

"On 9/8/09, Meyer, then a 21-year-old Marine corporal, repeatedly risked his own life to save the lives of 36 U.S. and Afghan troops," Carney tweeted. "Over the weekend, the president's staff called Meyer in preparation for Thursday's Medal of Honor ceremony at the White House."

"Meyer asked the staffer if he could have a beer with the President," Carney said.

"POTUS invited Dakota to come by the White House this afternoon."