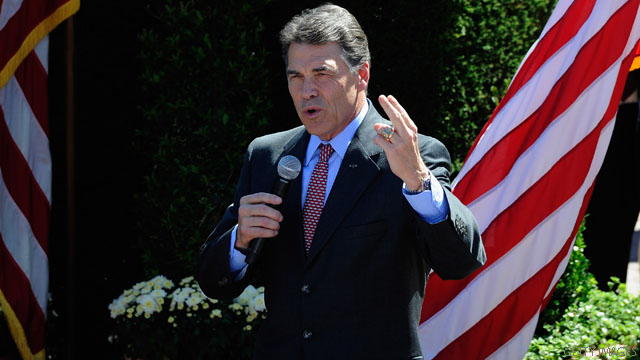 Speaking at their convocation Wednesday, the Texas governor said God has a unique plan for everyone, a lesson he learned after returning home from his service in the U.S. Air Force.

"What I learned as I wrestled with God is I didn't have to have all the answers, that they would be revealed to me in due time and that I needed to trust him," Perry said. "Do not fret if you don't know your place in the world yet or what you want to be one day, simply trust."

"Trust that God wouldn't have put you here unless he had a unique plan for your life," Perry added in an address at the conservative Virginia school founded by Pastor Jerry Falwell.

Perry, the latest candidate to enter the GOP presidential nominating contest, invoked the memory of fallen veterans from the wars in Iraq and Afghanistan to ask that the students honor their memory.

"Because of what they gave I simply ask you to make the most of the freedom that they sacrificed for, that you redeem their sacrifice by living lives worthy of it," Perry said.

As members of a generation that "grew up in the shadow of 9/11," Perry told them the American response to evil is to engage and build allies around the world.

"We must do what Ronald Reagan did at the apex of the Cold War, which is to speak past the oppressors and the illegitimate rulers and directly to their people," Perry said. "The ones who live behind the wall of oppression are yearning to be free."