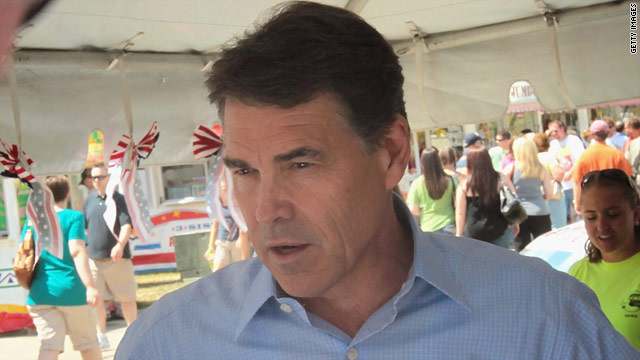 The Republican presidential candidate said he is confident in his state's appeals process – and respects the Supreme Court's decision to stay the execution of Buck as it reviews the way a lower court handled the case.

"We have an appeals process in the state. We have a process of justice in the state of Texas that I have full confidence in," Perry told reporters after touring a Coca-Cola bottling plant here in Atlantic, Iowa. "As it goes forward, there are obviously ways to address any concerns."

Among those concerns: whether or not Buck's status as an African-American contributed to his receiving a death sentence. At the time of the trial, a psychologist repeatedly told juries that black or Hispanic defendants were more likely to commit future crimes.

Perry was asked if he thought Buck was unfairly sentenced to death because of racially-tainted testimony.

The governor did not answer directly, instead saying the nation's highest court will weigh in.

"They will have open and appropriate conversations between those lawyers representing Mr. Buck and the state of Texas. And the decision will be made on whether or not there was any problems on the way that case was handled," Perry said. "And at that particular point in time, there'll either be a retrial or the Supreme Court will make the decision that no, things were not in question at all. They're taking the appropriate path, in my opinion."

"Whether or not he is guilty is not the question. Clearly he was guilty of murdering two people in the state of Texas."

The Texas governor was also asked about previous comments from John Cornyn, who is currently a U.S. senator but was Texas attorney general in 2000. Regarding seven death row inmates – including Buck – Cornyn said he believed racially tainted testimony from the psychologist caused them to be unfairly sentenced to death.

Six of the seven inmates saw resentencing trials. Buck did not.

Saying he respects Cornyn, Perry continued, "I think there have been four of those cases that you make reference to that [Cornyn] talked about earlier. They all went back for a retrial. Every time, the individual was sentenced to their execution for heinous murders in the state of Texas. I won't venture a guess what the Supreme Court will decide on this one."