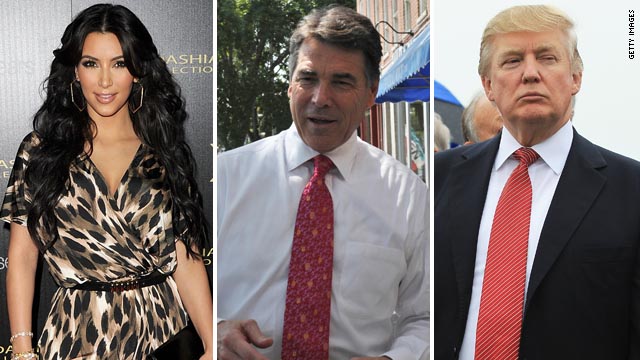 (CNN) - Donald Trump. Kim Kardashian. Rick Perry? The Texas governor might sound like the odd man out, but for at least one night Perry fit right in with reality television's finest.

According to the New York Post, Perry attended the Sherri Hill fashion show with Trump on Wednesday night after the two dined together. According to her website, Hill specializes in prom and pageant dresses.

Kendall Jenner, the younger sister of reality television star Kim Kardashian, was working as a model in the show. According to the report in the Post, Perry "lit up when The Donald chimed in about her former Olympian dad," Bruce Jenner. Jenner won a gold medal in the decathlon event in the 1976 Montreal Olympics.

On Wednesday, Trump defended some of Perry's more controversial decisions during his time as Texas governor on CNN's "The Situation Room" with Wolf Blitzer.

On the executive order Perry signed requiring a vaccine that guards against HPV, a virus that can cause cervical cancer, Trump said he's "not sure if [Perry] would have done it again," the Texas chief executive "made a poignant statement, that he believes in saving lives," during CNN's Tea Party Republican Debate Monday.

And Trump finds no fault in Perry's characterization of Social Security as a "Ponzi scheme."

"The fact is that I've heard some very smart liberal friends of mine say on television it is a 'Ponzi scheme,'" Trump countered, showing there may be few things about Perry that have rankled the mogul the way they have other conservatives.