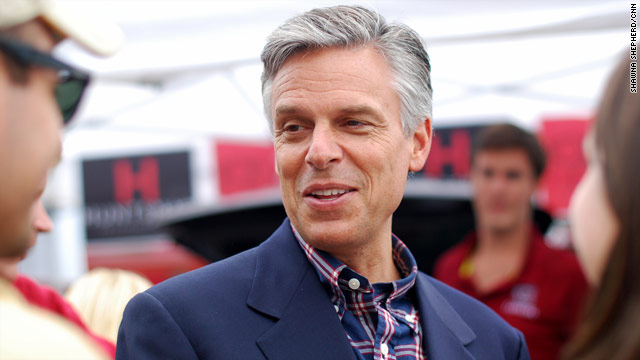 Columbia, South Carolina (CNN) – Jumping from tailgate to tailgate, former Utah governor and U.S. ambassador Jon Huntsman spent Saturday in what appeared to be an effort to remind voters that it's still early in the political season and the presidential nomination is still anyone's to win.

Huntsman and his wife, Mary Kaye, tailgated and watched long-time South Carolina football rivals each play on their home turf, first the Clemson Tigers vs. Auburn Tigers, and in the evening, University of South Carolina Gamecocks vs. Naval Academy.

The presidential candidate, wearing khakis and a navy and red plaid shirt, stood out at both games in a sea of fanatics dressed in Clemson's school colors of purple and orange and USC's garnet and black.

He was smart to stay somewhat neutral or risk criticism of being an opportunistic fair-weather fan in this early Southern primary state.

The first game was easy. When Huntsman was asked for whom he was rooting, he could cover both teams by simply saying, "Tigers."

Huntsman was torn over USC or Navy because his two sons are connected to the Academy. His oldest son, Jon, is a second-year midshipman third class at the Naval Academy, and William attends Naval Academy Prep School in Rhode Island and plays football there. Huntsman, speaking like a proud father, was telling people his son has been recruited to play at Annapolis after he graduates.

"My head's with Gamecocks," he said, stumbling a bit as he mouthed the suggestive words naming USC's mascot, before turning to Navy: "My heart's with my boys."

This was a visit for Huntsman's South Carolina heavyweight supporters to introduce the White House hopeful to prominent South Carolinians and uncommitted politicians.

Huntsman spent some time visiting with former South Carolina Gov. David Beasley before the Clemson game. Beasley, who supported former Arkansas Gov. Mike Huckabee in 2008, has not endorsed a 2012 presidential candidate and is being coy about whom he will endorse.

Beasley was effusive in his praise of Huntsman's credentials but noted his current standing in the polls shows that he has a lot of work to do to.

"If he can get his message out I think he'll play well in South Carolina," Beasley said. "But can he win the political process, I don't know. I think he's got a tough row to hoe but you never know, he gets a break here or there and ends up in the first tier of candidates. I think if he can get in the first tier then people will start listening to his message because he's brilliant."