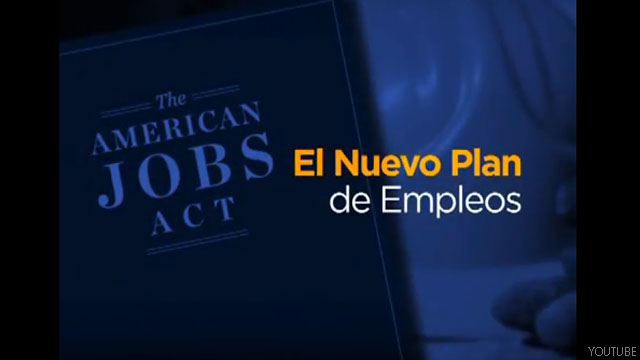 Washington (CNN) - The Democratic National Committee is reaching out to Spanish-language voters as part of its push to sell President Barack Obama's jobs plan.

Monday the DNC announced it would begin running Spanish-language television and radio commercials in Denver, Colorado, Las Vegas, Nevada, and Tampa, Florida. Obama won all three battleground states, which have large Hispanic and Latino populations, in the 2008 election, and keeping the states in the Democratic column is crucial for the president's re-election chances.

"Obama has a new plan that: Creates thousands of jobs fixing roads and bridges. Cuts taxes for small businesses – for each job they create. And gives credits to businesses that employ veterans that have finished their service," says the narrator in the ad. "But in the face of Republicans, the President can't do it alone. Read the plan. Stand together for more jobs."

In an email release announcing the commercials, Rep. Debbie Wasserman-Schultz, the DNC chair, said that Obama's proposals would "boost the construction industry, a sector that employs 2.77 million Hispanics, by investing in construction and infrastructure projects; cut taxes for an estimated 250,000 Hispanic-owned small businesses, and provide Hispanic veterans with greater employment opportunities by incentivizing businesses who hire them."

The Republican National Committee quickly responded to word of the ad.

"Clearly Hispanic voters are going to be important for both parties but unfortunately Barack Obama's failure with jobs and the economy has hit the Hispanic community harder than any other," said RNC spokesperson Kirsten Kukowski. "While Americans struggle with 9.1 percent unemployment, Latinos are struggling with over 11 percent. Republicans are working hard to elect leaders that will ensure Hispanics can find work and their businesses can thrive."

Obama won two-thirds of the Hispanic and Latino vote in the 2008 presidential election, according to national exit polls, up from the 53 percent Sen. John Kerry, the 2004 Democratic presidential nominee, carried four years earlier. But according to recent national polling by Gallup, Obama's approval rating among Hispanics and Latinos now stands at 48 percent, the lowest rating since he took over in the White House and a big drop from the 60 percent he held at the beginning of the year.

The state of the economy is one reason for the decline, but another may be the issue of immigration. Candidate Obama called for comprehensive immigration reform when he was running for president, but he has been unable to pass anything through Congress to deliver on his campaign pledge.

The president appears to be increasing his outreach to Hispanic and Latino voters. In the past week he held a roundtable with Hispanic journalists at the White House and addressed the Congressional Hispanic Caucus's annual gala dinner.

The DNC's Spanish language ads come one week after the party committee went up with commercials touting the president's jobs plan in key battleground states across the country.