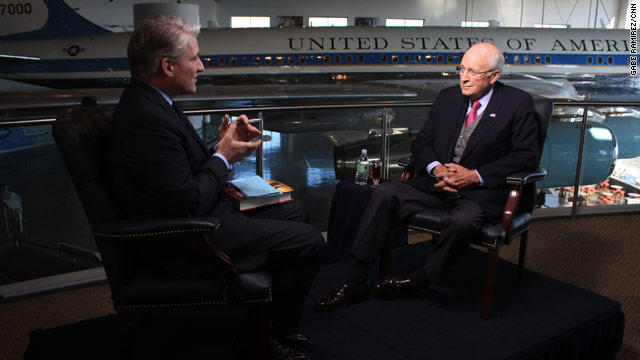 "It does worry me because I think after all the effort that's been made and the sacrifice that's come in the form of lives of our soldiers and national treasure, both Afghanistan and Iraq are extraordinarily important," Cheney said in a wide-ranging interview with CNN Chief National Correspondent John King. The interview, which took place at the Ronald Reagan Presidential Library in Simi Valley, Calif., airs Tuesday on "John King, USA" at 7 p.m. ET.

"I think they were responding to what they believe to be popular opinion in the country," Cheney said. "I haven't talked to either one of them about this but I do see this sense of 'It's time to head for the exits, let's get out, let's bring the boys home, let's spend the money here in the states.' And I think that would be tragic if in fact it led to a resumption of the kinds of problems that both those nations faced when we went in."

Cheney said that he wasn't endorsing any particular candidate in the 2012 race yet, but that he was ready to assist any Republican looking to beat President Barack Obama.

"Obviously I'm not a supporter of President Obama's," Cheney said. "I will support the Republican nominee. I'll do everything I can to defeat our Democratic friends in the next election."

In the interview, Cheney issued harsh words for Palestinian officials making a bid for statehood at this week's United Nations General Assembly.

"The hope for an ultimate result that you'd end up both with an Israel that is recognized and a Palestinian state that is recognized, and it looks like they are trying to short circuit the process here," Cheney said. "I worry that this isn't going to advance the process and make it more likely that they can reach an agreement. It's likely to retard it, to diminish it."

Cheney said he wasn't keeping tabs on Perry, but that it was appropriate for Obama's competitors to criticize the president's foreign policy.

"I don't know what Governor Perry is up to," Cheney said. "I'm not involved in our presidential primary process this time around. I haven't endorsed anybody, not likely to anytime soon either, but I think there is room for criticism of the president in the foreign policy arena. I was really disturbed when he went off to Cairo and announced a proposition that the United States didn't have any sort of special role in the world, we were just like everybody else and I think that's a mistake. I think that diminishes U.S. influence."