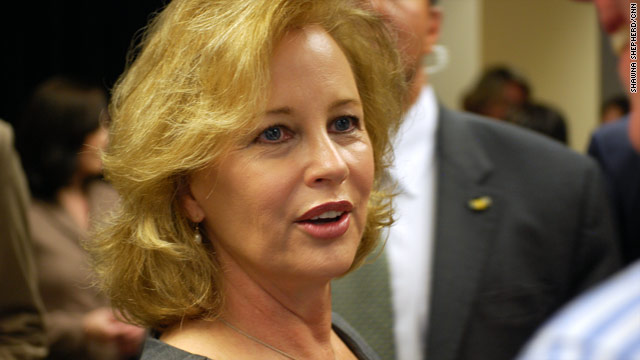 Columbia, South Carolina (CNN) – GOP presidential candidate Rick Perry’s wife was on hand for the grand opening of the campaign’s South Carolina headquarters Wednesday, where his Columbia-based staff also used the opportunity to release a slate of endorsements in the pivotal early primary state.

Roughly 20 percent of the General Assembly’s Republican legislators, some of whom have previously announced their support, will serve on Perry’s South Carolina legislature steering committee.

The first lady of Texas, making her first solo trip to the state since her husband announced his candidacy for president in Charleston on Aug. 13, talked about the commonality between Texas and the Palmetto state.

“We have the same values, we like the same food, we kinda talk the same talk,” Anita Perry told to a packed room in the lobby of the campaign’s downtown Columbia headquarters, which was also the home of Gov. Nikki Haley's successful 2010 gubernatorial campaign.

That’s a big reason why the Texas governor is expected to do well in South Carolina. At this stage in the campaign, Perry is leading the pack among White House contenders nationally and in the state.

While some state officials and legislators have endorsed other 2012 presidential candidates, a majority are heeding Republican Sen. Jim DeMint’s advice to “keep their powder dry” and hold off endorsing anyone until the race further develops.

That includes Republican state Sen. Tom Davis, a rising star who was named this summer by Politico as one of the “50 politicos to watch,” who has met with a number of candidates but is not ready to support anyone in the race just yet.

Davis said politicians in the first Southern primary state should take advantage of the unique access to candidates and think it through, “as opposed to jumping on the train before it leaves the station to be on the side of a winning candidate,” he said.

The list of legislators endorsing Perry include five state senators and 16 representatives.

Between the two leading White House contenders at this stage in the campaign, Perry is seen as the tea party-favored front-runner over Romney, who placed fourth in South Carolina’s 2008 primary.

Jonathan Hill, who is a leader of the Anderson Tea Party in South Carolina’s conservative upstate, tells CNN that “Rick Perry gives a lot of people in the tea party movement heartburn” for misusing the role of government with his executive order mandating the HPV vaccine in 2007. The mandate was killed in the Texas legislature months later and Perry admitted issuing an executive order was a mistake and has since acknowledged he should have included an opt-in as opposed to an opt-out provision that might have appeased some social conservatives.

Hill said if he had to choose between the two presumed frontrunners, assuming no one else enters the race and the other candidates are not on the ballot, he would choose Perry over Romney, but he doesn’t consider one much better than the other. He said he will support whoever becomes the Republican nominee, but is wary of career politicians “who will say whatever is politically expedient.”

At the grand opening of today's headquarters, Mrs. Perry, campaign staffers and supporters were greeted by a handful of protesters who were protesting positions Perry held during his 10-year tenure as Texas governor and previously as a politician in the state.

Some were wearing sombreros and holding signs thanking Perry for their free education, referring to his passage of the state's version of the national DREAM Act legislation, which allows undocumented students who have applied for citizenship to pay in-state college tuition.

One protester, donning an Al Gore mask, held a sign thanking Perry for supporting the Democrat in the late 1980s. Someone else wore a Hillary Clinton mask, in a nod to his support of Clinton's health care plan in the 90s.