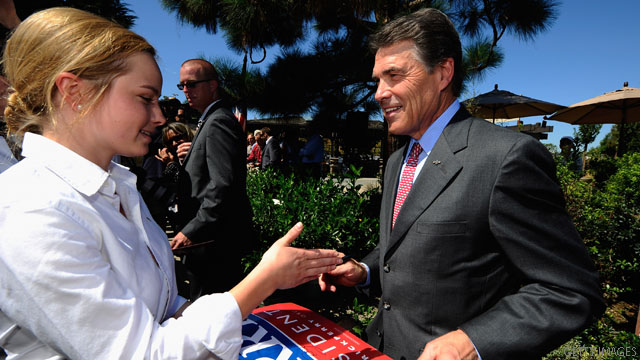 There are 295 Republican state representatives in the first-in-the-nation primary state.

Perry has mounted an aggressive effort in New Hampshire since announcing his candidacy for president Aug. 13. His campaign is continuing to build up staff in the state.

Deputy house Speaker Pam Tucker tops the list of endorsements. Tucker hosted a house party for Perry the day he entered the race.

"We are honored to have the support of these men and women who represent and understand the sentiments of voters across the state," said Paul Young, a senior adviser to the Perry campaign in New Hampshire.

"They know that people want more jobs and economic prosperity, less taxes and government interference, and they recognize that Gov. Perry can deliver on that promise."

Nine state representatives have announced their support for former Massachusetts Gov. Mitt Romney, who owns a residence in New Hampshire and has made winning the state a key to his 2012 strategy. A campaign source said many more state representatives have chosen to endorse Romney and the campaign would continue its plan of releasing those supporters' names over the coming weeks.