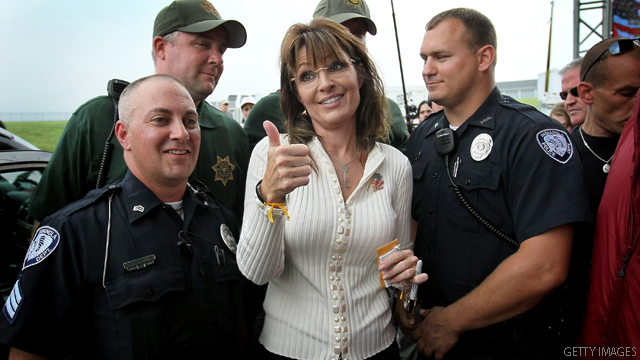 (CNN) - While she still hasn't made up her mind on a run for the White House, a new national poll suggests that former Alaska Gov. Sarah Palin is making gains against President Barack Obama in a hypothetical 2012 general election matchup.

According to a McClatchy-Marist survey, the GOP's 2008 vice presidential nominee trails Obama 49 to 44 percent in a hypothetical showdown, after trailing by 21 points in an August poll and 26 points in a June survey. The poll indicates that Palin now leads the president among crucial independent voters.

But while the survey, which was released Tuesday, indicates Palin may be closing the gap with the president, it also suggests that most Republicans are not enthusiastic about her launching a bid for the nomination. By a 72 to 24 percent margin, Republicans and independents who lean toward the GOP do not want Palin to run for the White House.

As for her plans for the 2012 Republican presidential nomination, Palin says they’re still up in the air.

"I think people are still going to be coming and going because there is still time, and I'm still one of those still considering," she said Tuesday night in an interview on the Fox News Channel.

But Palin did acknowledge that the calendar will soon force a decision, as some of the early voting states in the primary and caucus season have November deadlines for candidates to appear on the ballot.

The poll indicates that Texas Gov. Rick Perry leads the field in the race for the GOP presidential nomination, with the support of 30 percent of Republicans and independents who lean toward the GOP. Former Massachusetts Gov. Mitt Romney, who's making his second run for the White House, received 22 percent support. Rep. Michele Bachmann of Minnesota was at 12 percent, with everyone else in the single digits.

In hypothetical 2012 general election matchups, the survey shows Obama with a two point margin over Romney, 46 to 44 percent, and the president with a nine point advantage, 50 to 41 percent, over Perry.

The McClatchy-Marist poll was conducted September 13-14, after the CNN/Tea Party Republican debate in Tampa, Florida, with 1,042 adults questioned by telephone. The survey's overall sampling error is plus or minus 3.5 percentage points.