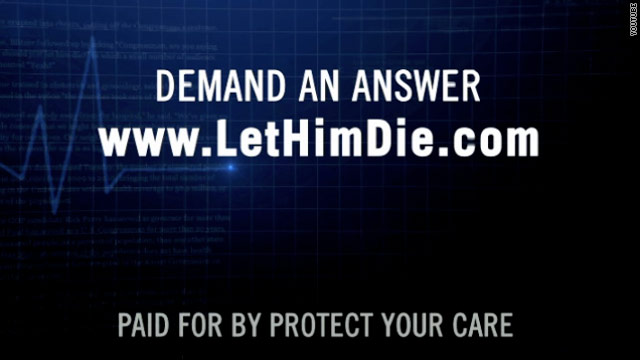 The ad, sponsored by Protect Your Care, also chastised the candidates for standing by as a few audience members at the CNN/Tea Party Republican Debate cheered the idea of a man dying because he lacked health insurance.

At last week's debate, CNN Anchor Wolf Blitzer posed a hypothetical scenario, asking the candidates if an uninsured man should be left to die if he could not pay his medical bills after a six-month emergency stay in an intensive care unit.

But support for the idea of letting the man succumb to his ailment if he could not pay for adequate care could be heard coming from debate attendees in the form of applause.

In the 30-second ad, images of tea party activists are intermingled with clips of the GOP candidates. It also included sound from some audience members jeering during the debate.

"Will Republican candidates listen to the extremes in their party on health care?" the ad's narrator inquired. "Or the American people?"

The ad is featured on www.LetHimDie.com and will broadcast in the Orlando media market from Thursday to Sunday, including spots during a Thursday night debate in Florida. Edward Vale, the communications director for the group, said the the television and online ad purchases, including several outreach events on the ground scheduled through the weekend, cost approximately $85,000.

Protect Your Care announced they will set up camp in the Sunshine State to drum up anti-GOP support in light of Thursday's televised showdown, hosted by Fox News and Google, where nine candidates will vie for the Republican slot on next year's general election ticket.

According to a statement, the group is performing outreach to Hispanic voters and perceives Florida to be a ripe battleground state for bringing the GOP to task on issues such as Medicare and Social Security. The group's ad campaign aims to infiltrate the state's online and television mediums to express their disdain for health care agendas touted by GOP presidential hopefuls.