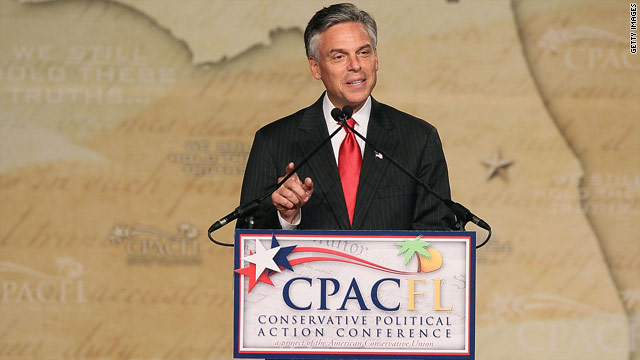 And the crowd applauded. Politely, at least.

Building a broad coalition is the only way to win a general election against President Barack Obama in 2012, he argued.

Huntsman's appeal for open arms was not met with the noisy reception that greeted socially conservative candidates who addressed CPAC earlier in the day.

As for Huntsman, many conference-goers filed out of the convention hall before he spoke. But the thousand or so Republicans who stayed appeared to give him a chance.

Huntsman confronted nagging questions about his conservative bona fides and admitted that he breaks with tea party orthodoxy on issues like climate change and same-sex civil unions (he believes in both).

He went on to tout his opposition to abortion rights and the $400 million tax cut he signed in Utah, the largest in state history.

Huntsman said that even if Republicans disagree with him on some issues, they cannot accuse him of being dishonest about his record.

That opened the door for him to take a clear shot at Romney, who leads the polls in New Hampshire, an early primary state Huntsman needs to win if he hopes to capture the GOP nomination.

"I am not sanding over a history of being pro-choice, raising taxes and enacting heavy-handed government mandates," he said, departing from his prepared remarks. "So before believing the hype and rhetoric, all I ask is for you to take a look at my record and to make your judgments and decisions based on the record."