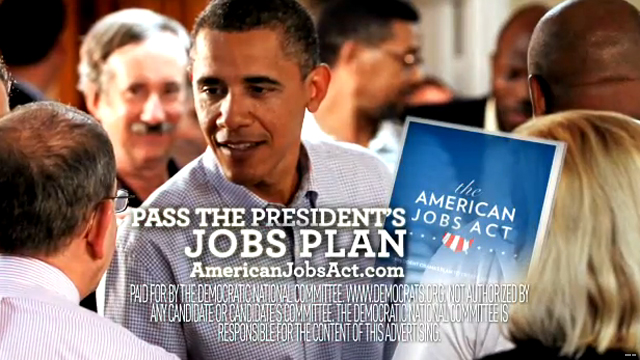 (CNN) - The Democratic National Committee will go up with a new ad this weekend urging Congress to pass the American Jobs Act President Barack Obama sent to Capitol Hill last week, according to the DNC.

The 30-second spot, which will run in crucial swing and early voting states across the country, says the fully subsidized plan will improve infrastructure, help small businesses, end tax breaks for the wealthy and close corporate tax loopholes.

"You know that saying, when the going gets tough, the tough get going?" the narrator in the ad says. "Tell Congress: No more games. Pass the plan."

The ad follows the president's recent trips to the 2012 battleground states of Ohio, North Carolina and Virginia. It replaces a spot that touted the president's jobs plan. The DNC also aired a Spanish language ad with a similar message.

Infused with symbols of an idyllic America, the commercial is set to air for the next few weeks in parts of Colorado, Florida, Iowa, Nevada, New Hampshire, North Carolina, Virginia and Washington, D.C.

Kirsten Kukowski, press secretary for the Republican National Committee, said Obama and the DNC are "more concerned with saving Obama's job than creating jobs for the rest of the country."

"The new DNC ad campaign shows that the President needs all the help he can get to sell his Stimulus 2.0 that increases taxes on Americans and small businesses we depend on to create jobs," Kukowski said.

Obama: Opt out for No Child Left Behind coming