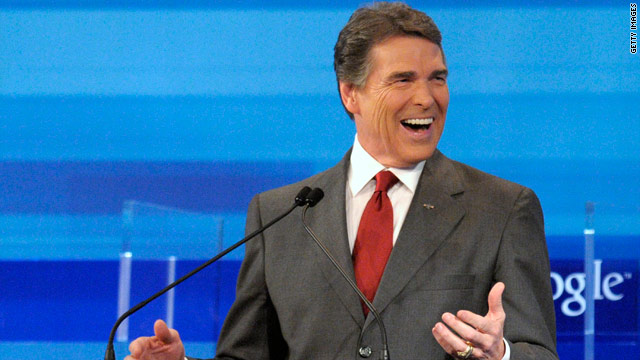 Orlando (CNN) - Rick Perry may be a little saddle sore after the rough ride he had at Thursday's GOP presidential debate, but the real question is whether the front-runner in this horse race did more than just throw a shoe.

Republicans looking for reviews of Rick Perry's performance can go right to the search engine that sponsored the debate, Google.

Political Notebook: Listen as CNN's Candy Crowley joins Bob Costantini to contemplate if the GOP field is automatically being culled; plus, David Stockman sounds off on present-day economic policies and politics in Washington.

Bill Kristol wrote in the conservative Weekly Standard, "it was close to a disqualifying two hours for him."

Perhaps just as damaging was the Texas governor's defense of his past support for in-state college tuition for illegal immigrants. Romney and former Pennsylvania Sen. Rick Santorum both piled on.

"That kind of magnet draws people into this country," Romney said.

Santorum had even harsher words: "I would say that he is soft on illegal immigration."

Perry seemed to question their compassion, not traditionally the best way to win over the party's anti-illegal immigration activists.

"I think you don't have a heart," Perry said. "This was a state issue. Texans voted for it. And I still support it." His rebuttal was met with both cheers and boos from the large audience.

At a post-debate speech to Florida conservatives, Romney said immigration is a matter of the head and the heart.

"I think that if you are opposed to illegal immigration, it doesn't mean that you don't have a heart, it means that you have a heart and a brain," Romney said at a conservative action meeting in Orlando Friday.

Perry wasn't about to let that slide.

"As conservatives we know that values and visions matter," Perry said at the same event later in the day Friday. "It's not who is the slickest candidate or who is the smoothest debater that we need to elect. We need to elect the candidate with the best record and the best vision for our country."

Little more than a month after tossing his cowboy hat into the ring, Perry has quickly galloped to the head of the pack. Now, the Lone Star governor is finding out it could be a bumpy ride to the nomination. But analyst Ralph Reed, chairman of the Faith and Freedom Coalition, takes a long view of Perry's political track record, noting that the candidate has never lost a race.

"It's very difficult to get into a race this late and then have four debates in basically five weeks," Reed said. "I wouldn't underestimate Rick Perry."