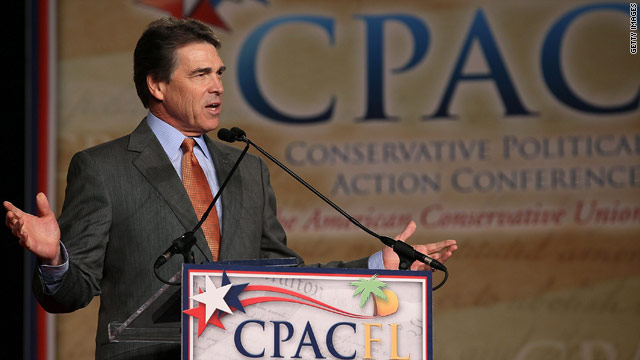 Perry seeks to put shaky debate performance behind him

Orlando (CNN) - Texas Gov. Rick Perry moved to put an underwhelming debate performance behind him during an address to a convention of Florida Republicans on Friday.

"As conservatives, we know that values and visions matter," Perry told nearly 2,000 Republican activists at the Florida Conservative Political Action Conference in Orlando. "It's not who is the slickest candidate or who is the smoothest debater that we need to elect. We need to elect the candidate with the best record and the best vision for our country."

He was making a clear reference to former Massachusetts Gov. Mitt Romney, who attacked Perry repeatedly during Thursday night's GOP presidential debate and won plaudits for his performance.

Perry, on his heels throughout the night, struggled at times to respond.

But with the stage all to himself on Friday, Perry took sharp aim at the Massachusetts health care law implemented by Romney in 2006.

"If 'Romneycare' cost Massachusetts 18,000 jobs, just think what it would do to the rest of the country if 'Obamacare' is applied to the rest of this country," he said. "As president I will oppose any big government health care plan that costs jobs and raises the tab on taxpayers."