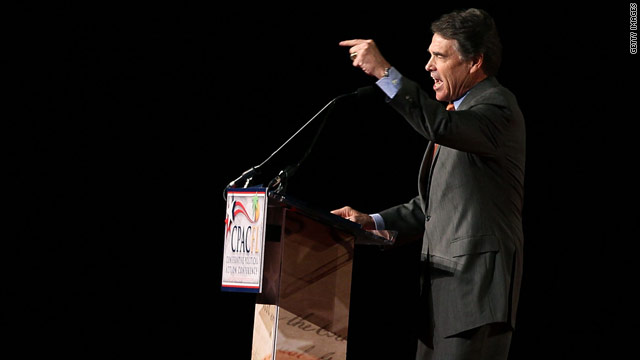 "What Americans are looking for isn't the slickest candidate," Perry told Republican activists Saturday. "They are looking for an authentic principled leader. You've seen what happens when our country chooses leaders who emphasize words over deeds."

Perry was speaking at a breakfast, organized by his campaign, for delegates to the Presidency 5 Forum in Orlando, a convention of Florida Republicans that culminates with a presidential straw poll Saturday afternoon.

Although he did not mention his opponent by name, Romney was unmistakably in his sights.

"America doesn't need more slick promises," Perry said to applause. "We need a principled leader who will stand on his conservative values."

The Texan is the only major candidate actively courting the roughly 3,500 activists participating in the Presidency 5 straw poll.

Perry called Florida "the state that picks presidents," a remark that might irk Republican activists in Iowa and New Hampshire who firmly guard their leadoff positions in the presidential nominating process.

Perry recalled how he watched the 2000 Florida recount with anxiety when he was lieutenant governor of Texas, wondering if then-Gov. George W. Bush would pull out a victory and head to the White House.

"And here we are, 11 years later, and I got all my hopes on Florida again," he said.

He implicitly chided Romney and other candidates who "spurned" the straw poll, calling their move "a big mistake."

Straw poll results are expected around 6 p.m., at which point Perry will be long gone.

Both he and Romney are slated to address the Mackinac Island GOP conference in Michigan in the evening.