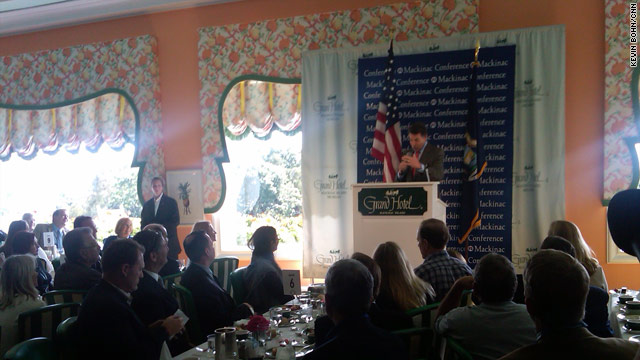 Rick Perry takes subtle digs at Romney in his own backyard

Mackinac Island, Michigan (CNN) - Gov. Rick Perry brought some Texas charm to Michigan as he came into what some may consider enemy territory. Perry received an enthusiastic welcome as he spoke to about 1,600 attendees of a key Michigan Republican conference Saturday.

Perry, who has battled Mitt Romney forcefully in the last several weeks, seemed to take some subtle digs at his major challenger for the nomination, a Michigan native who still has strong ties in the state. Not only was Romney raised there, he is the son of a popular governor and has built a strong network of supporters and donors here.

During his remarks to the activists and party officials attending the Mackinac Republican Leadership Conference, held on an island retreat, Perry said his party should not "accept someone who is going to blur the lines between himself and President Obama. ... I am going to draw a sharp contrast." That could be seen as a reference to similarities many Republicans see between the Massachusetts health care plan put in place by Romney and the one enacted by congressional Democrats. The line drew mild applause from the audience.

He drilled down on his key message: He is the best candidate to challenge Barack Obama: "No other candidate on that stage has the record I have."

Perry then took a swipe aimed apparently at Romney although he did not mention him by name. "There may be slicker candidates and there maybe smoother debaters, but I know what I believe in and I am going to stand on that belief every day. I will guide this country with a deep, deep rudder." Perry attacked Romney during Thursday's Fox News/Google Debate as someone has shifted positions on many issues.

In this economically hard-hit state, Perry emphasized his economic and job creation record - ideas that went over well with many in the audience. The state's unemployment rate was 11% last month.

"America can be great again," he said. "We need to get America's boot" off of small businesses regarding regulation.

Emphasizing a theme that resounds well with his conservatives, Perry pushed the popular idea of the necessity of limiting the size and reach of the federal government.

Winning him some points, he paid homage to the state's auto industry and the famous Reagan Democrats, conservatives who hail from the Detroit suburb of Macomb County, and made sure he did not mispronounce this island retreat's name.

Several of the attendees who supported Romney in 2008 told CNN after the speech they were impressed with Perry.

Downing did say Perry's recent performance in the debates has not helped him. "Clearly Perry is going to need to polish his debating skills."

Another attendee said she was impressed with Perry because "he has some credentials ... he delivers very passionately with commitment."

Daina Anuzis said he hit a chord. "I was struck by his understanding of the common man. He is very charismatic. I don't think Obama stands a chance against him."

Perry also is holding some meetings with activists while at the conference. Several state Republicans told CNN he is in the early stages of building a network of supporters and donors in this crucial state.