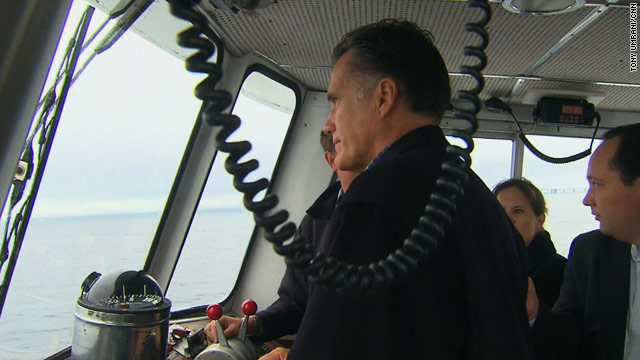 Mackinac Island, Michigan (CNN) - Emphasizing his roots in Michigan, Mitt Romney started early Saturday morning paying a visit to a diner in the small coastal town of St. Igance, sitting with patrons and recalling his father, who was a popular governor in the state. Romney touched on his time growing up here as well as its various sports teams and even the geography.

He told the diners, "Everything I see around here reminds me of my parents" and that coming back "feels very much like home."

Romney hopes his Michigan background and continuing ties to the state will give him a major boost towards capturing the state's primary, which is scheduled for Feb. 28th - relatively early in the process.

Romney is the dinner speaker Saturday evening at a key Michigan Republican gathering, the Mackinac Republican Leadership Conference. Approximately 1,600 party activists, donors and officials from across the state are gathering on the scenic Mackinac Island for the biennial conference at a time when the GOP in the state has renewed strength, including a new Gov. Rick Snyder, and the state GOP hopes it can help the party re-gather the White House.

But Texas Gov. Rick Perry is not ceding the state just yet. He is also speaking at the conference.

When CNN asked Romney whether his rival was coming into enemy territory, he said, "I expect all of the candidates to make a real run at Michigan, express their views. I am happy to be here as well. I am hoping that I will be able to win the primary in Michigan when the time comes. But we welcome other folks here - make it a real contest, have a lot of folks come in, spend some money. That is good for Michigan."

While he said "Michiganders want to see all of the candidates," behind the scenes Romney and his team are working hard to lock up the state. He has an organization already built in the state thanks, in part, to his 2008 primary win and some of his family still living here. He has won the endorsement of key officials, such as the speaker of the state house and the attorney general. On Saturday, Romney is trying to take advantage of the large number of power players at the conference and is set to meet with a number of activists and donors - both those who have committed to him as well as those who are uncommitted and who he hopes to sway to his side.

"Hopefully the people of the state will support me like they did last time," he said.

Romney briefly took the helm of the ferry that took him from St. Igance back to Mackinac, recalling the time he spent on the island while his father, George, was governor. During his father's tenure, the only mansion for the chief executive was on Mackinac. He recalled taking a 16-year-old girl to the island sailing, riding bikes and even spending the night at the mansion. He would eventually marry that girl, Ann. Romney emphasized they slept in different bedrooms at the time, joking "we come from the 1960s."

He spent a lot of time Saturday mingling with voters both in the diner as well as more than 100 that greeted him when he disembarked from the ferry. He walked through the downtown of the island for several blocks shaking hands.

He chose not to engage Perry. When asked about Perry getting hit by some conservatives on the issue of immigration, he said different candidates have differences on various issues and "those differences will be weighed by different people different ways. I hope people support me. You just let people know what you support. If they stand with you that would be great." He called Thursday night's debate, which pundits mostly said he did very well at, as "a great debate."