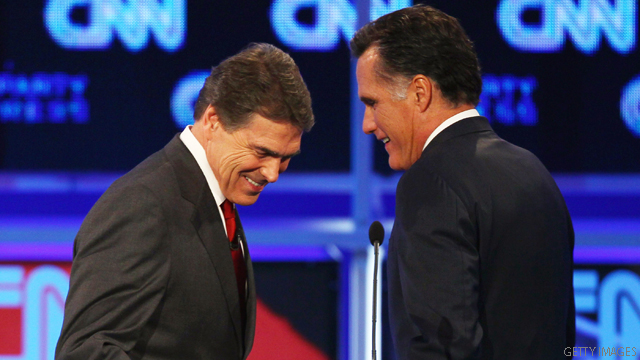 Washington (CNN) - Despite his performances in the two most recent Republican presidential debates, a new national survey indicates that Texas Gov. Rick Perry remains on top of the field in the race for the GOP nomination.

But a CNN/ORC International Poll also indicates that former Massachusetts Gov. Mitt Romney does better than Perry in hypothetical 2012 general election matchups against President Barack Obama and matches evenly with the president on the issues and on personal characteristics.

According to the survey, which was released Monday, 28 percent of Republicans and independents who lean towards the GOP say they support Perry as their party's presidential nominee, with Romney at 21 percent. Former House Speaker Newt Gingrich is at ten percent, with Rep. Ron Paul of Texas, who's making his third bid for the White House, former Godfather's Pizza CEO and radio talk show host Herman Cain, and former Alaska Gov. Sarah Palin, all at seven percent. The poll indicates that Rep. Michele Bachmann of Minnesota is at four percent, with former Sen. Rick Santorum of Pennsylvania at three percent and former Utah Gov. and ambassador to China Jon Huntsman at one percent.

Palin has flirted with a bid for the GOP nomination, but the 2008 Republican vice presidential nominee has not taken any concrete steps towards launching a campaign. Taking Palin out of the mix produces a similar result: 30 percent for Perry, 22 percent for Romney, 11 percent for Gingrich, and all other candidates in single digits.

The poll was conducted Friday through Sunday, after last Thursday's debate in Orlando, Florida. Pundits and analysts rate Perry's performance in that debate, and in a debate one a week and a half earlier in Tampa, Florida, as uneven. Perry's distant second showing at a much-watched straw poll of Florida GOP activists this past weekend may be a reflection of his debate performances, and his stance on illegal immigration and border security, which were spotlighted in both debates.

"Did Perry's performance in the most recent debate affect the horse race? Maybe yes, but maybe no," says CNN Polling Director Keating Holland. "Perry's support is down just two points, and Romney is up only one to three points - and since all those numbers are well within the sampling error, it doesn't look like much has changed, possibly because average voters aren't as plugged into the debates as political junkies are. If the debates have had an effect, it may be mostly in favor of Gingrich, whose support went from 5 percent in mid-September to 10 percent now."

According to the poll, the president's overall approval rating, at 45 percent, is essentially unchanged since July. Fifty-two percent of all Americans disapprove of his job performance to date.

The 2012 election will not be an up-or-down vote on Obama, but rather a choice between the president and another candidate, so head-to-head match-ups against the top GOP candidates are a better test of Obama's electoral strength.

The survey indicates that Romney fares best against Obama. It's basically all tied up with 49 percent for Obama and 48 percent for Romney in a hypothetical two-way match-up. According to the poll, Obama holds a five point margin over Perry, 51 percent to 46 percent.

In a hypothetical matchup between Paul and Obama, the president holds a four point margin, 51 percent to 47 percent. Obama handily beats Bachmann and Palin in two-way match-ups. But keep in mind, as always, that polls taken more than a year before the election have little or no predictive value.

Obama's ace-in-the-hole remains the fact that he is personally more popular than his policies. According to the poll, his favorable rating, which measures reactions to him personally, is eight points higher than his job approval rating. Fifty-two percent of all Americans disagree with him on issues, but 58 percent believe he has the personality and leadership qualities a president should have. And by a 49 to 43 percent margin, Americans say that personal qualities are more important than issues to their vote for president.

Only Romney matches up well with Obama on both of those measures. Six in ten Americans say Romney has the personal qualities a president should have, compared to only 45 percent who feel that way about Perry.

Forty-six percent of Americans agree with Romney on issues. "That doesn't sound like much, but it's far better than the 39 percent who say they agree with Perry. That 46 percent is also ten points higher than the number who agreed with Romney in his first run for the White House in 2008," adds Holland.

Santorum: 'I condemn' booing of gay soldier, didn't hear it