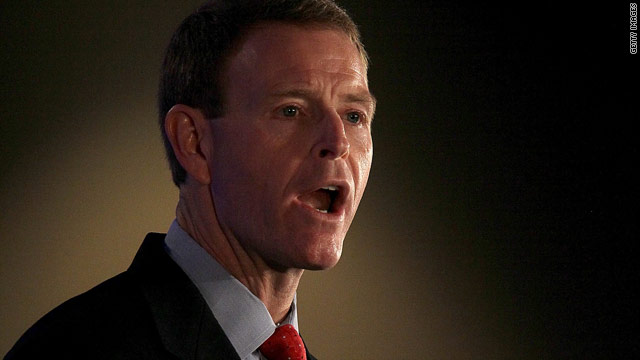 Washington (CNN) – A social conservative leader weighed in on the current crop of GOP presidential candidates Tuesday, saying Mitt Romney has lost momentum on issues that matter most to values voters.

"He is not speaking as strongly to the social issues as he did four years ago," said Tony Perkins, president of the Family Research Council, at the National Press Club in Washington.

Romney, who's taken a noticeably different campaign approach compared to his 2008 bid for president, has not promoted the values of his Mormon faith as much as his last go-around, focusing instead on this election cycle's biggest issue: the economy.

Perkins questioned Romney's decision to dial back on his social message, asking if the former Massachusetts governor was "genuine and solid" with those values in the first place.

"I think that if he is to emerge as the front-runner and the standard bearer for conservatives, he's going to have to shore that up," Perkins said.

Perry got harsh reviews for saying people lack hearts if they disagree with him on a law allowing certain undocumented immigrants to receive in-state tuition credits.

Perkins said that while many conservatives took offense to the comment, Perry may simply need more practice on the debate stage.

"I think he is still working on getting his responses to those issues down to a very concise message," Perkins said.

And while speculation still swirls over whether New Jersey Gov. Chris Christie will jump into the race, Perkins said the current field needs no more candidates.

"I think Chris Christie has done some really good things, but that's relative when you consider where he's at: New Jersey," Perkins said. "It doesn't take a lot to do good things up there."

Perkins went out to say Christie would have trouble garnering support from social conservatives, questioning some of the governor's appointments and supporters who tend to lean to the left on social issues.