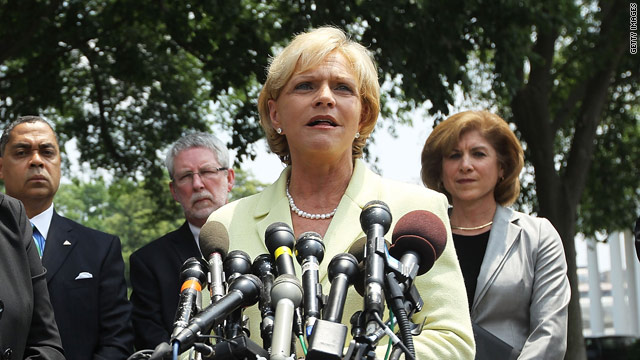 (CNN)-Maybe it was wishful thinking.

North Carolina Gov. Bev Perdue, whose second term in the governor's mansion is no guarantee, told a group of Rotarians Tuesday that she thinks "we ought to suspend, perhaps, elections for Congress for two years."

The Democratic chief executive was elected in 2008 with a three-point advantage over her Republican opponent and is expected to face a tough battle for re-election.

But state politics weren't the talk of the hour when she spoke to the Rotary Club, according to the Raleigh News & Observer. Perdue was discussing the economy, which she felt might be important enough to preclude elections…maybe.

"You have to have more ability from Congress, I think, to work together and to get over the partisan bickering and focus on fixing things," she said.

"I think we ought to suspend, perhaps, elections for Congress for two years and just tell them we won't hold it against them, whatever decisions they make, to just let them help this country recover."

And in what the article describes as a "level" tone, she said, "I really hope that someone can agree with me on that."

Press Secretary Christine Mackey pushed back at criticism blasting the governor for her seemingly-cavalier remarks in a statement saying, "Come on. Gov. Perdue was obviously using hyperbole to highlight what we can all agree is a serious problem: Washington politicians who focus on their own election instead of what's best for the people they serve."