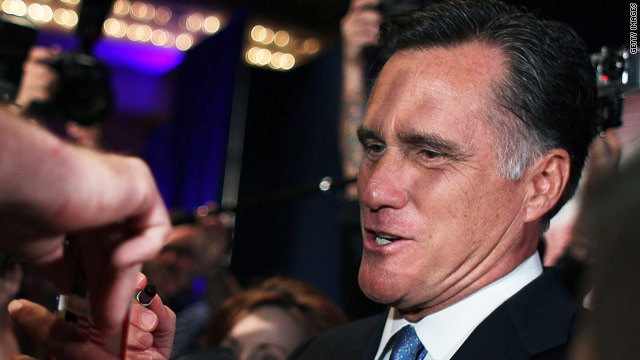 Des Moines, Iowa (CNN) – A fresh poll gauging the Republican presidential race in Iowa shows Mitt Romney on top. But it also presents a mixed bag of news for the former Massachusetts governor and his two top competitors in the GOP race.

According to the American Research Group, Inc. survey: Mitt Romney leads among those Republicans likely to attend Iowa's caucuses, despite his having paid scant campaign attention to Iowa thus far. Also, Rick Perry is skimming off support from Rep. Michele Bachmann, though the Texas governor is running neck-and-neck with the Minnesota congresswoman in the state. And the ARG poll shows Bachmann holding a solid lead with Iowa tea party supporters, though her poll rating dramatically shrinks among non tea partiers.

In the survey, Romney receives 21 percent among likely Iowa Republican caucus-goers, with Bachmann at 15 percent, Perry at 14 percent and Texas Rep. Ron Paul at 12 percent.

That Romney holds a solid lead in the Iowa survey is noteworthy: he has spent far less time in the Hawkeye State this campaign season compared to Bachmann and Perry, who've recently barnstormed Iowa. Romney's last appearance in Iowa was in August.

Among those Iowans who say they will definitely attend the GOP caucuses, Romney also leads his top two opponents.

In the survey, the former Massachusetts governor garners 19 percent support among that group compared to the Minnesota congresswoman and the Texas governor each at 15 percent and Paul at 14 percent.

But according to the poll, Perry can claim bragging rights for momentum in Iowa.

In July, the survey showed Perry at two-percent - well before he announced his candidacy in August. Meanwhile, the poll says Perry's rising popularity is partly due to one thing: he's taking away support from Bachmann.

It is with tea party supporters that Bachmann sees an especially bright spot.

The congresswoman leads with 19 percent among that group, according to the survey, though that's down from 30 percent in July. Perry gets 14 percent among tea party supporters, Paul and former House Speaker Newt Gingrich are both at 13 percent, conservative businessman Herman Cain is at 10 percent - and Romney falls into the single digits with a six percent showing.

How did these numbers change when non tea party supporters in Iowa were asked who they support?

Among that group, Romney maintains a whopping lead. Thirty-seven percent of those who don't support the tea party, or are undecided about the movement, support the former Massachusetts governor, while Perry gets 15 percent, Paul sees 11 percent and Bachmann gets 10 percent.

The American Research Group, Inc. survey conducted 600 telephone interviews of GOP caucus goers in Iowa between September 22-27. The survey's margin of error is plus or minus four percentage points.