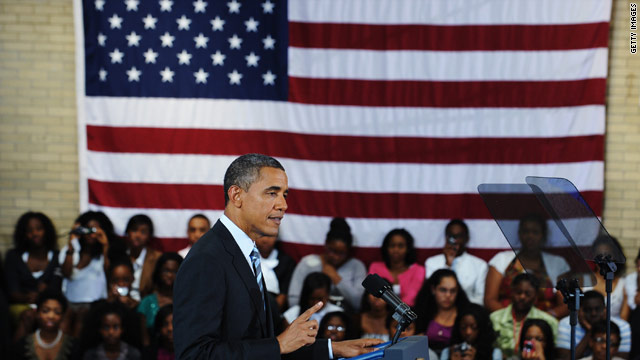 "Just getting into college isn't enough," Obama said in his speech at Banneker High School. "You need to graduate."

Obama said the United States is ranked sixteenth in the world for the number of young people with college degrees. He urged students to continue their education after they graduate high school.

"The fact of the matter is that sixty percent of jobs in the next decade will require more than a high school diploma," he told the students. "That's the world you're walking into."

Banneker's principal Anita Berger enjoyed Obama's speech and agreed that college graduation is an important topic. According to Berger, Banneker High School currently has a 100 percent college acceptance rate. But the principal said just getting into college isn't enough.

"It's not only about being accepted to college, but being able to finish college," Berger said. "And we need to make sure that happens."

Most college dropouts leave school because of financial burdens. According to a report released by Public Agenda in 2009, having to work and make money while in school is the number one reason young adults leave colleges and universities. The second largest reason is that they can't afford tuition and fees.

Obama only mentioned his efforts at making college affordable one time during his speech. Instead of discussing students' financial obligations, Obama touched on students' academic responsibilities.

His speech focused on encouraging students to work hard, ask questions, take risks, and to persevere. Obama also told students that they should strive to be the best and not be embarrassed if they aren't good at something right away.

"I kind of feel the same way about my math class," Hazel said.

Hazel is taking the SATs in November and plans to graduate high school this spring. She hopes to attend Temple University, Pennsylvania State University or St. John's University next year and go to medical school to become a pediatrician.

Hazel already feels the pressure of working while in school. She works part-time at the National Capital Coalition to Prevent Underage Drinking after school and on the weekends. She enjoys her job and says it is more for the experience than the money, but she admits it's hard to stay focused.

Obama highlighted other students who, like Hazel, are taking the initiative to start making a difference in the world. He gave examples of students who are raising money for charity and even researching how to combat cancer cells.

"Nothing inspires me more than knowing young people are already making their marks," Obama said in his speech. "You don't have to wait to make a difference."