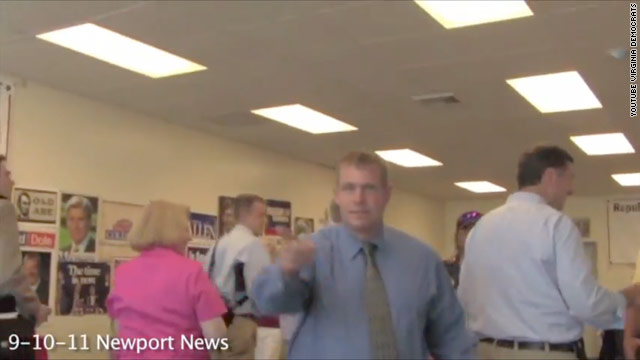 Washington (CNN) – Tracking trackers is the order of the day in the Virginia senate race as Republican George Allen runs to recapture the seat he lost in 2006, arguably as a result of the moment that made trackers famous.

Virginia Democrats claim the former governor and senator has something to hide. Meanwhile, Allen's team says it's "disappointing, but not surprising" that Democrats are using the tactic of sending trackers to his events, forcing them to remove them.

And that is the subject of a new web video that shows Democratic supporters getting the boot at five different GOP campaign events.

The Virginia Democratic Party, which released the video Wednesday, pointed to websites that promoted the events as open to the public. But, with camera in hand, the Democratic tracker attending each meeting was asked to leave.

Asking campaign trackers to leave an event is not unusual, especially as footage from the events can be spun as ammunition against opponents.

The tracker had been volunteering for Allen's challenger, Democratic Sen. Jim Webb.

"It's disappointing, but not surprising, that Chairman Kaine and his allies see this as a central focus, while families across Virginia continue to struggle under the failed policies that he championed as President Obama's hand-picked head of the Democratic National Committee," said Bill Riggs, Allen campaign spokesman, in response to the video.

The Kaine campaign says they do not have a tracker on Allen.

A source with knowledge of the Virginia Democratic Party's activities said the tracker in the video is an employee of the party.