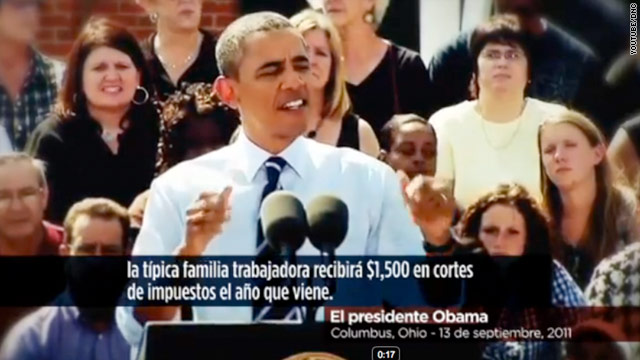 (CNN) - Democrats are looking to reach the key Hispanic demographic through a new Spanish-language television ad that slams Republicans for their resistance to President Barack Obama’s jobs bill.

The 30-second spot, titled "Siempre Dicen No” ("Always Say No"), was produced by the Democratic National Committee and will begin airing this weekend in Denver and Las Vegas - cities in two key battleground states that Obama won in 2008 and is looking to win again in 2012. Both have large Hispanic populations.

“Republicans say no to Medicare… No to financial aid… No to help for the middle class,” the group says in Spanish.

They go on to list the possible benefits of the bill.

“More money for the house? Fifteen hundred dollars more for a family like mine?”

The ad ends with the question, “Why not?”

In a release announcing the ad, the DNC wrote that Obama’s jobs plan would benefit Hispanics by “putting more Americans back to work and putting more money back into the pockets of small businesses and middle class families.”

The DNC has targeted Spanish-speaking voters in Nevada and Colorado previously, in addition to ads in Florida, New Mexico and Washington, D.C. Democrats hope that Hispanic voters will support the president as robustly as they did in the 2008 election, when exit polls showed two-thirds of Hispanics voting for Obama.

Democrats do have reason to worry - recent national polling by Gallup shows Obama’s approval among Hispanics standing at 48 percent, the lowest rating of his presidency.

Obama has been actively reaching out to Hispanic voters as his reelection campaign ramps up, including answering questions about issues in the Hispanic community at an online roundtable Wednesday.