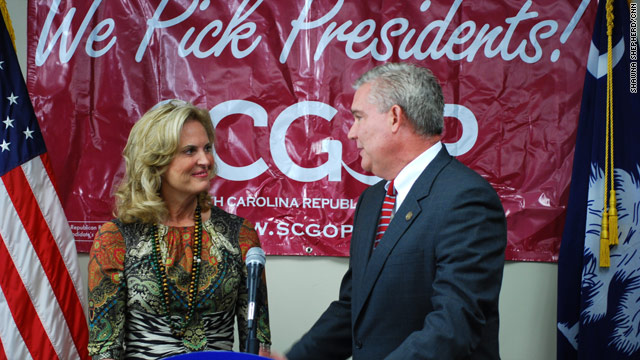 Columbia, South Carolina (CNN) - Former Massachusetts Gov. Mitt Romney's White House run in South Carolina is official after his wife submitted the paperwork and the $35,000 required to get his name on the primary ballot.

Ann Romney delivered the papers to the state's GOP chairman in person and told a small group gathered at a Friday morning event in Columbia that her husband is "now going to be actively campaigning and participating" in South Carolina.

South Carolina Treasurer Curtis Loftis, who is serving as the candidate's state chairman, has said publicly that Romney will be returning to the critical early southern primary state late next week. The campaign has not yet released a schedule and would not confirm any details.

Loftis said Friday the Romney campaign will be opening its South Carolina headquarters next week, which he is hearing will be located in West Columbia. Texas Gov. Rick Perry opened their campaign headquarters in the state capital last week.

Until now, Romney's bare-bones staff has been made up of one, senior adviser David Raad, who lives in the Greenville area.

Both Raad and Loftis maintain the two-time presidential candidate will be active in the state. Raad told CNN earlier this month, "As the campaign progresses you'll see the operation unfold, the engagement continue to unfold and you'll see the governor here substantially."

Romney has spent little time so far in South Carolina compared to his first bid for the White House in 2008, spending millions of dollars here only to finish fourth in the primary. He made two visits in September, appearing at a Labor Day presidential forum in Columbia and delivering a speech on labor policy after touring the Charleston Boeing plant. (http://on.cnn.com/rp2mkl )

Mrs. Romney spent Thursday campaigning in Spartanburg and Simpsonville. In the evening, she had dinner with Gov. Nikki Haley and her husband, and then spent the night at the Governor's Mansion. (http://on.cnn.com/oP0iyC)

Romney is the seventh presidential candidate to file paperwork and pay the fee required to get your name on South Carolina's Republican presidential primary ballot.

Perry, Minnesota Rep. Michele Bachmann, and former House Speaker Newt Gingrich are among White House contenders who have not filed their candidacy with the state's Republican Party, according to Executive Director Matthew Moore.