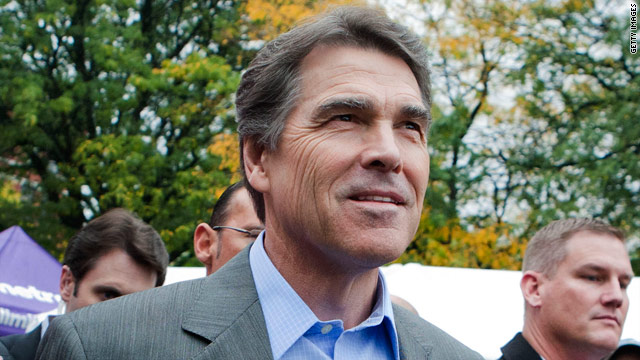 Washington (CNN) – When news broke in the national media over the weekend that Republican presidential hopeful Rick Perry’s family had leased a property in his native Texas known by the name “Niggerhead,” Perry’s campaign swiftly responded. But so far, almost no one has taken the opportunity to slam Perry over the property’s controversial name. Instead, the reaction has been subdued - even from the White House and from some of Perry’s most prominent and outspoken rivals for the GOP nomination.

The Washington Post reported Sunday that early in his political career, the Texas governor had played host to friends, supporters, and fellow lawmakers at a secluded West Texas hunting camp with the derogatory moniker. According to the newspaper, the property’s name was “painted in block letters across a large, flat rock standing upright at its gated entrance.” Citing written responses from Perry, the Post also reported on Perry’s efforts to deal with the offensive name by painting over the rock. But the Post also reported that Perry’s account differs from recollections of seven people interviewed by the newspaper about the property.

"A number of claims made in the story are incorrect, inconsistent, and anonymous, including the implication that Rick Perry brought groups to the lease when the word on the rock was still visible," Perry communications director Ray Sullivan said in a statement Sunday after the Post story was published. "The one consistent fact in the story is that the word on the rock was painted over and obscured many years ago."

Given the reaction to the story, it appears that Perry’s campaign may have protested a bit too much.

Mitt Romney, Perry’s chief rival in the GOP race, said Monday in a cable news interview that he found the term offensive and thought most people view the term as such. Then, Romney suggested that the matter should be taken up with Perry.

Also speaking Monday, Herman Cain, one of Perry’s surging rivals for the GOP nomination, dialed back his earlier criticism of Perry.

"I really don't care about that word. They painted over it," Cain said, referring to a sign painted on a rock at the property the Texas governor once leased.

The matter "doesn't bother me at all," Cain added, emphasizing that he was satisfied by Perry's explanation of it and that he was "not playing the race card. I am not attacking Gov. Perry."

Rival and fellow Texan Rep. Ron Paul wanted to talk about other things. "I have no idea what the circumstances were,” Paul said when asked about the controversy while campaigning in New Hampshire Monday, “but in this day and age to try to turn something around and make him say that he endorsed using that word - I think we should worry about the wars, and assassinations, the economy, not trying to find out some way that you're going to blame Perry.”

Asked to comment on the situation during Monday’s press briefing, White House press secretary Jay Carney also took a pass. “All I would say is the name is clearly offensive,” said Carney, “and, from what I’ve read – and I have no inside knowledge beyond what I’ve read – the governor shares that opinion.” Pressed for more, Carney did not take the opportunity to criticize Perry. “I really don’t know that much about it except from what I’ve read and that’s all I can say about it.”

Holding forth on Twitter Monday afternoon, Democratic strategist and CNN Contributor Donna Brazile also suggested, like Paul, that there are more important things to talk about. “I prefer to discuss the President's jobs bill, the wall street protestors and the upcoming march to reclaim the American Dream for all,” Brazile, who is African-American, tweeted after telling her 100K+ followers that she’s found most conversations about racism in the country to be “divisive & counter-productive.” The topic of racism “becomes polarizing,” Brazile also said on Twitter Monday.

But Perry has not escaped entirely criticism-free. Michael Steele, the former chairman of the Republican National Committee, told Time Magazine he found the situation “very troubling on some many levels, for so many reasons.” The outspoken Steele, who is African-American, added, “It does lead one to feel that there was a level of insensitivity about how this would be perceived by the larger community.”

And liberal firebrand Al Sharpton, who is African-American, has leveled perhaps the strongest criticism at Perry. The situation revealed by the Washington Post “is alarming and displays a new height in racial insensitivity in national politics,” Sharpton, president of the National Action Network said in a statement Sunday. “Mr. Perry should immediately fully explain how his family rented from a place named after such an obvious racist term or he should withdrawal from the race. He is either blindly insensitive or hopelessly unaware of where he spends his time. Either way it makes one wonder if he is ready for prime time and certainly whether he is ready for the White House."

But GOP strategist Alex Castellanos suggested that Perry’s ties to the property may become a political millstone around his neck should he win the nomination and face off against the nation’s first African-American president.

“In addition to poor debates, government vaccines, and immigration issues, Rick Perry has tied another stone around his neck,” Castellanos, who is not currently supporting a candidate in the 2012 race but who did work for Romney’s campaign in the 2008 cycle, said in an e-mail to CNN. “There are growing doubts in the GOP that he could be a credible candidate against Obama. Republicans are concerned that Perry's missteps might make the race a referendum on the challenger instead of the incumbent. That's the campaign Obama wants and it scares Republicans to death.”