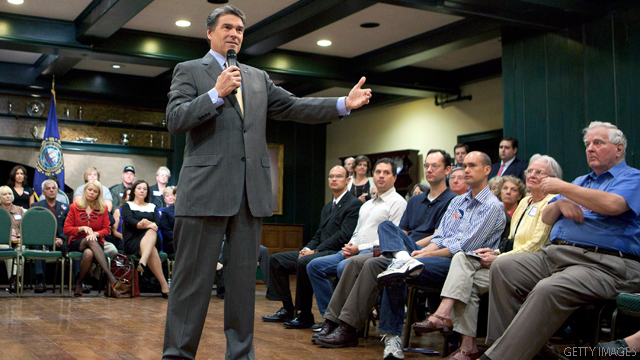 A front-page Washington Post story Sunday exposed the eyebrow raising name of a hunting camp leased and frequented by Perry and his father. "Niggerhead" was painted across a rock at the gated entrance of the property, according to the report. But Team Perry was quick to clarify the account, issuing a harsh statement early Sunday morning after CNN contacted the campaign.

"A number of claims made in the story are incorrect, inconsistent, and anonymous, including the implication that Rick Perry brought groups to the lease when the word on the rock was still visible," Perry communications director Ray Sullivan said in a statement. "The one consistent fact in the story is that the word on the rock was painted over and obscured many years ago."

Sullivan said the governor's father, who the paper reported first leased the property in 1983, painted over the offensive language in the early 1980s. Sources quoted in the Post story said the word was visible until a few years ago.

The first reaction to the story from a Republican presidential candidate came from Herman Cain who appeared on two Sunday morning talk shows and called the property name "very insensitive."

On "Fox News Sunday," the former Godfather's Pizza CEO, who is African American, said there "isn't a more vile, negative word than the N-word, and for him to leave it there as long as he did, until before, I hear, they finally painted over it, is just plain insensitive to a lot of black people in this country."

Perry's camp shot back again, this time directly to the GOP rival.

"Mr. Cain is wrong about the Perry family's quick action to eliminate the word on the rock, but is right the word written by others long ago is insensitive and offensive," Sullivan said in a statement. "That is why the Perrys took quick action to cover and obscure it."

While the ranch name consumed much of the Beltway chatter Sunday, it was Perry's comments about sending troops into Mexico to combat drug cartels that received the most attention Saturday.

"It may require our military in Mexico working in concert with them to kill these drug cartels and to keep them off of our border," Perry said after speaking at a house party in Manchester, New Hampshire.

Perry said the leaders of Mexico and the U.S. should meet after next year's elections to address the deadly drug trade in that country.

Campaign press secretary Robert Black said the border governor wanted to cooperate with the Mexican government and wasn't ruling anything out.

"He's going to work with the Mexican government to do what's necessary," Black said.

- CNN's Rachel Streitfeld and Gabriella Schwarz contributed to this report.