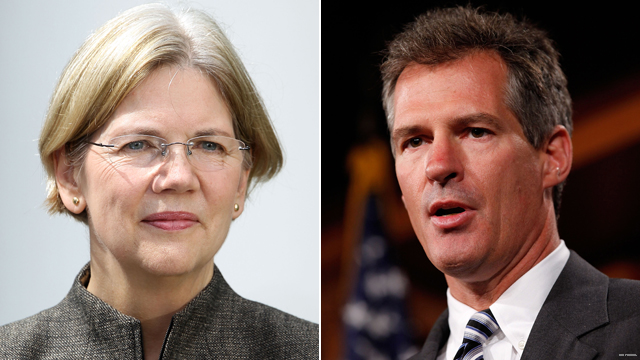 (CNN) - The frontrunners in the Massachusetts Senate race, incumbent Republican Sen. Scott Brown and Democratic candidate Elizabeth Warren, are in a statistical dead heat, according to a new survey released Monday.

The UMass-Lowell/Boston Herald poll of registered voters showed Brown ahead of Warren in a hypothetical matchup by three percentage points, 41% to 38%, within the survey's 3.8% sampling error.

Brown, a former state senator, was elected to the Senate in a January 2010 special election following the death of Democratic Sen. Ted Kennedy, who held the seat for over 45 years. Elizabeth Warren, who announced her bid last month, will face a crowded field of candidates in next year's Democratic Senate primary. The Harvard Law professor previously served as special adviser to President Barack Obama for the recently formed United States Consumer Financial Protection Bureau.

But two Democrats who passed on the race, two-term Gov. Deval Patrick and former Rep. Joseph P. Kennedy II, could pose bigger threats to the GOP incumbent, according to the poll.

Patrick led Brown 43% to 36% and Kennedy held an eight percent advantage, 45% to 37%. Even Attorney General Martha Coakley, who lost her race against Brown last year, would be in a dead heat during this election cycle.

When pitted against each other in a hypothetical 2012 match-up, Republican candidate and former Massachusetts Gov. Mitt Romney received 33% support to President Barack Obama's 57% among Bay State voters. Texas Gov. Rick Perry did not fare quite as well, garnering 25% support to Obama's 62%.

The survey questioned 1,005 registered Massachusetts voters via telephone between Sept. 22 and Sept. 28 with an overall sampling error of plus or minus 3.8 percentage points.