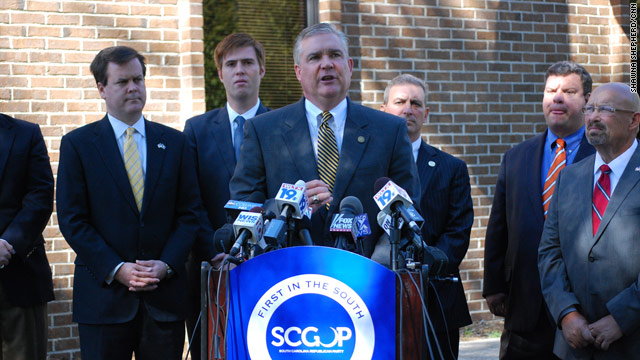 "Truly we will remain the state that picks presidents. A 30-year track record, candidates know they got to come here, we anticipate remaining in that spot," said South Carolina GOP Chairman Chad Connelly, speaking at party headquarters in Columbia Monday.


Connelly announced the date of next year's presidential primary, which was tentatively scheduled for February 28, will be held Saturday, January 21.

The move is designed to put space between South Carolina and Florida, which bucked national Republican Party rules last week and decided to hold their primary on Tuesday, January 31.

Republican National Committee rules specify that the only states permitted to hold contests before March 6 are the traditional early voting states of Iowa, New Hampshire, South Carolina and Nevada.

Under RNC rules, states in violation of the calendar can be stripped of half their delegates to next August's Republican National Convention in Tampa, Florida.

Connelly said he doesn't believe South Carolina should be penalized as harshly as Florida.

"I really think a state who violates the calendar ought to lose all their delegates. Furthermore, the states that are pushed into January to keep their spot should not be penalized at all," said Connelly. "I understand South Carolina is facing penalties and we may lose as many as half of our delegates as well. It's just not right."

The RNC will not impose any penalties until December when the national party convenes its winter meeting.

The updated calendar is likely to push the Iowa caucuses and New Hampshire
primary even earlier into January as they seek to protect their role as the two leadoff contests in the presidential nominating process.

Connelly also announced Monday the state party, in conjunction with Fox News, will host a presidential debate in the days leading up to South Carolina's Jan. 21 Republican primary.

–CNN's Peter Hamby and Paul Steinhauser contributed to this report.